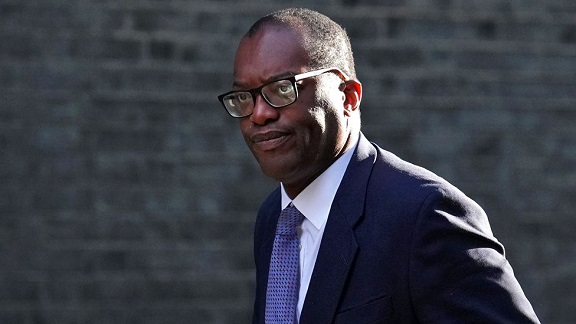 The government has U-turned on plans to scrap the 45p rate of income tax for higher earners.

Chancellor Kwasi Kwarteng told the BBC the proposals, announced just 10 days ago, had become "a massive distraction on what was a strong package".

READ ALSO: UK Chancellor expected to back down on tax rate

The decision, which marks a humiliating climbdown for Prime Minister Liz Truss, comes after several Tory MPs criticised the plan.

On Sunday, Ms Truss had said she was committed to the policy.

The plan to scrap the 45p rate, paid by people earning more than £150,000 a year, was announced as part of a package of tax cuts.

Mr Kwarteng told BBC Breakfast the proposal was "drowning out a strong package", including support for energy bills, and cuts to the basic rate of income tax and corporation tax.

Asked whether he owed people an apology, he said: "We've listened to people. And yeah, there is humility and contrition in that. And I'm happy to own it."

On how the decision was made, he said: "The prime minister decided not to proceed with the abolition of the rate."

However, pressed on whether it was her U-turn, Mr Kwarteng added: "No, we talked together, I said this is what I was minded to do and we decided together, we were in agreement that we wouldn't proceed with the abolition of the rate."

Asked if he had considered resigning, he said: "Not at all."

On Sunday, the prime minister had told the BBC the move to cut the top rate of income tax was "a decision that the chancellor made".

But she also said she was absolutely committed to it as part of a package to make the tax system "simpler" and boost growth.

Asked whether his previous comment that there was "more to come" on tax cuts still stood, Mr Kwarteng said there would be no tax cuts ahead of the next Budget in the spring.

Pressed on whether his economic plans would mean spending cuts for public services, the chancellor said there would be more details in the government's fiscal plan on 23 November.

However, he said the government was sticking to its 2021 comprehensive spending review, meaning it will not raise spending in line with inflation.

"But Liz Truss will hope it creates space to move forward, hauling herself out of the political quagmire of a budgetary statement that imploded on contact with political reality," he said.

Labour called for the government to "reverse their whole economic, discredited trickle down strategy".

Shadow chancellor Rachel Reeves said the U-turn came "too late for the families who will pay higher mortgages and higher prices for years to come".

Lib Dem leader Sir Ed Davey called on the chancellor to resign, saying he no longer had "any credibility" and the whole mini-budget needed an overhaul.

Plans to scrap the top rate of tax had seen remarkable opposition from the markets, other parties and a growing number of Tory MPs.

Conservative Party chairman Jake Berry had previously warned Tory MPs who voted against the prime minister's tax measures that they would be kicked out of the parliamentary party - known as losing the whip.

But increasingly, it seemed Ms Truss did not have the numbers to get it through Parliament.

On Sunday, senior Tory Michael Gove hinted he would not vote for the plan when it came to Parliament, saying "I don't believe it's right".

The former cabinet minister said the PM's decision was "a display of the wrong values".

Former cabinet minister Grant Shapps had warned the prime minister would lose a Commons vote on the proposal.

He welcomed the U-turn, telling the BBC: "It's better to act, it's better to reverse ferret on something that's causing a problem like this, and it sends a very important signal to the public and also to the markets that we are serious about sound money."

The decision was also welcomed by the Confederation of British Industry.

Director-general Tony Danker said the pledge had become a "distraction" from other economic reforms, which he said would "make a real difference to growth".

The U-turn, suggestions of which were first reported by the Sun, comes on the second day of the Conservative conference in Birmingham, with Mr Kwarteng due to speak later on Monday.

The pound jumped on the news, rising by more than a cent against the dollar to $1.1263, before falling back.

Scrapping the top rate made up around £2bn of the £45bn worth of tax cuts announced by the chancellor in his mini-budget.

Other measures announced included a cut to the basic rate of income tax to 19%, a reversal of the recent rise in National Insurance and scrapping the cap on bankers' bonuses.