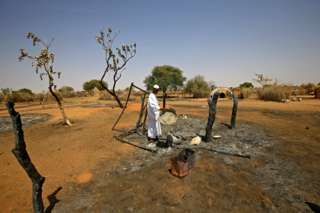 The United Nations has called for an investigation into the reported killings of at least 168 people in clashes in the Darfur region of Sudan.

The UN special representative Volker Perthes condemned the violence in Krink region of west Darfur, during which homes have been set on fire, hospitals attacked and goods looted.

Almost 100 more people were wounded in the violence, the General Coordination for Refugees and Displaced in Darfur, an independent aid group, said.

Several non-governmental organisations said an individual dispute sparked the fighting between Arab nomads and members of the Massalit minority in Krink.

There have been some reports that the Sudanese authorities deployed a notorious militia called the Rapid Support Forces, which was formerly known as the Janjaweed.

The International Committee of the Red Cross has warned of a rapidly deteriorating humanitarian situation and called for the injured and sick to be allowed to seek help.

The Janjaweed carried out widespread killings in the Darfur region two decades ago.