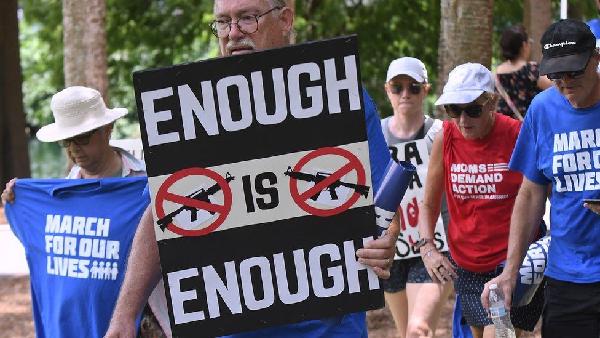 US campaigners have welcomed a potential cross-party deal on gun safety reforms but stressed the proposals do not go far enough.

"This is progress even if small," said David Hogg, a survivor of the 2018 Parkland school shooting in Florida.

Ex-lawmaker Gabrielle Giffords, injured in a 2011 shooting in Arizona, said it was an "important step forward".

The plans include tougher checks for buyers under the age of 21 and cracking down on illegal gun purchases.

They were announced by a cross-party group of US senators on Sunday. Crucially, the proposals are supported by 10 Republicans, meaning they have the numbers to be voted into law.

President Joe Biden also said the plans were "steps in the right direction" but they fell far short of what he and many Democrats have been calling for.

Previous attempts to tighten gun laws in the US - which has the highest rate of firearms deaths among the world's wealthy nations - failed to get the required support in Congress.

Tens of thousands of protesters rallied across the US on Saturday to call for stricter gun laws in the wake of two mass shootings.

"It's a great first step but that's just what it is," Mr Hogg told the BBC. "No single policy is going to stop every shooting but this policy could stop the next Parkland and that's a good step."

Ms Giffords, who suffered a severe brain injury, also gave a tentative welcome to the proposals. Writing on Twitter, she said the agreement "could be the first time in 30 years that Congress takes major action on gun safety.

"This deal represents that it's still possible to cut through politics and deliver for the American people," she said.

Moms Demand Action, a gun control advocacy organisation, tweeted: "Our grassroots army is ready to fight like hell to make sure it becomes law. 26 years for federal action on gun safety is unacceptable."

Senate Majority Leader Chuck Schumer, a Democrat, said he was "pleased" by the development and that he wanted to move a bill quickly to a Senate vote once legislative details were worked out.

The Republican Senate Minority Leader Mitch McConnell stopped short of endorsing the proposals but said they showed "the value of dialogue and cooperation".

The National Rifle Association of America (NRA), a powerful gun rights advocacy group, said it would respond once the full text of the reformed was released.

But the group stressed it would "continue to oppose any effort to insert gun control policies, initiatives that override constitutional due process protections & efforts to deprive law-abiding citizens of their fundamental right to protect themselves/loved ones into this or any other legislation".

Despite the high rate of firearms deaths, the US is a country where many cherish gun rights that are protected by the Constitution's Second Amendment to "keep and bear arms".

These are the first gun safety laws to receive bipartisan support of this kind in decades, with previous attempts by Democrats for strengthened controls frustrated by Republicans.

Attempts to tighten the laws in the wake of a previous school shooting at Sandy Hook in Connecticut nearly a decade ago - in which 20 children and six adults were killed - failed to get the required votes in Congress.

The Senate, or upper chamber of Congress, is currently split - with 50 Democrats and 50 Republicans - and legislation must have 60 votes to overcome a manoeuvre known as the filibuster.

Ten of the 20 senators who proposed the new measures are Republicans, meaning the proposals have the numbers needed to overcome the filibuster.

Democratic Senator Chris Murphy said a "substantial" part of the deal had been nailed down by negotiators, allowing the drafting of legislation to get under way on Monday, Reuters reported.