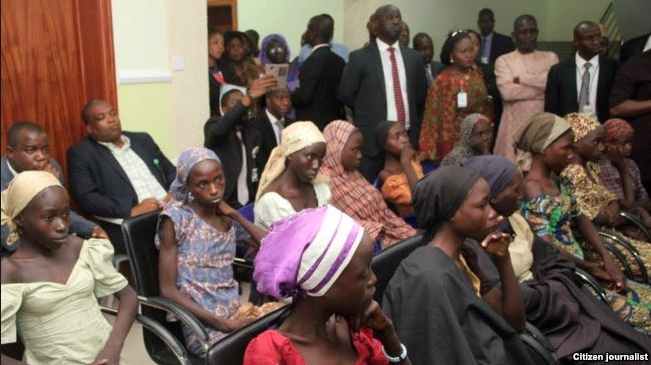 A group of the "Chibok girls" freed from Nigeria's Boko Haram militants have been reunited with their families.

The 82 girls, who were part of a huge group kidnapped from their school in 2014, are in the care of security services in the capital, Abuja.

Their parents travelled by bus through the night to meet their daughters.
More than 100 of the 276 girls, taken from the town of Chibok, are still being held by the militant group. Their whereabouts are unknown.

The reunion in Abuja had a celebratory atmosphere, with music and dance.
The BBC's Alistair Leithead says the girls were already dancing when their parents got off the bus and raced towards them, in an emotional reunion.

The most recent group freed was supposed to have 83 girls - but one refused to leave, saying she was happy and had found a husband, a Nigerian government spokesman said.
The freed girls remain in government care - under the eye of security services who are questioning them about their time spent as captives.

After the girls were abducted from their school in April 2014, a massive global awareness campaign began, using the Twitter hashtag #BringBackOurGirls.

The Chibok girls represent a fraction of the women captured by the militant group, estimates for which number in the thousands.