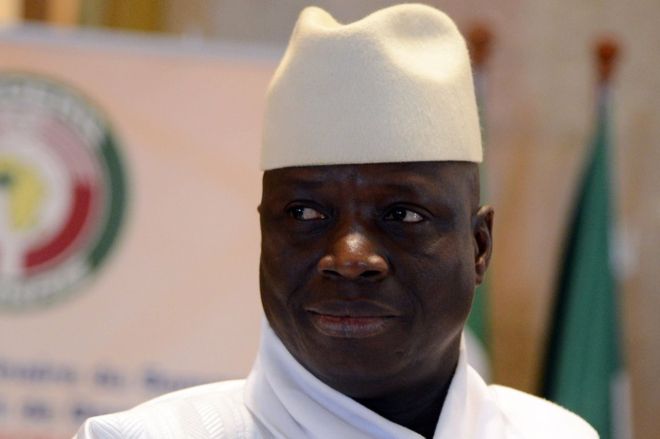 Share
The Gambia's former president stole "at least" $50m (Â£38.4m) from the state before he left the country in January, the justice minister has said. Yahya Jammeh is accused of withdrawing the money via a state telecoms company.
A court has ordered all his remaining assets in The Gambia to be frozen.
Mr Jammeh flew into Equatorial Guinea after 22 years in power. He lost an election in December and only agreed to step down after regional powers sent in troops threatening to force him out.
Luxury cars and other items were reportedly loaded on to a Chadian cargo plane as Mr Jammeh left the country.
The amount was initially suggested to be more than $11m (Â£8.8m) by Interior Minister Mai Ahmad Fatty then an aide to new President Adam Barrow.
But on Monday, Justice Minister Abubacarr Tambadou said that Mr Jammeh had withdrawn $50m between 2006 and 2016.
He accused Mr Jammeh of directing the "unlawful withdrawals" from accounts held at The Gambia's central bank, linked to state-owned Gamtel either "personally or under his instructions".
Mr Tambadou said a court order had frozen or temporarily held 88 accounts and 14 companies linked in some way to Mr Jammeh - amounting to all the politician's "known assets" remaining in The Gambia, as the country's new administration sought to prevent him "liquidating or dissipating" anything further.
It has also been reported livestock, cars and properties have been seized. Three of his cousins have been arrested after selling his cattle.
Mr Tambadou said the discoveries were "just a tip of the iceberg".
Mr Jammeh has been out of contact since he left The Gambia and has not responded to the allegations.
Â
BBC
Â