Libya Benghazi: Group blamed for 2012 attack on US mission disbands 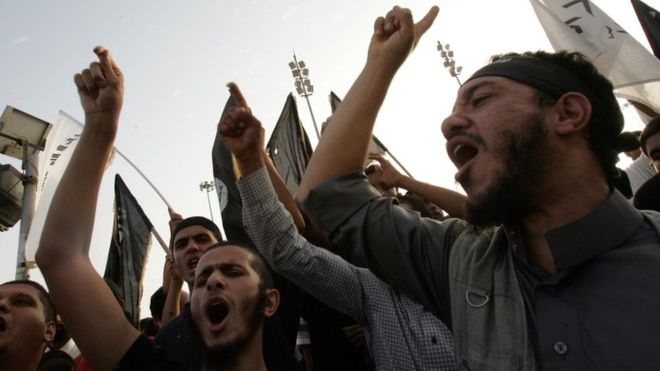 A group of militant Islamists in Libya, blamed by the US for the 2012 attack on the US mission in Benghazi which killed the ambassador, says it has disbanded.

The Ansar al-Sharia group said that its leadership had been wiped out while fighting the Libya National Army.
Most of its members are thought to have defected to the Islamic State group.

Separately, a case against Hillary Clinton brought by the parents of two Americans killed in the Benghazi attack has been dismissed by a US judge.

Patricia Smith and Charles Woods, parents of two of those killed, filed a lawsuit against Mrs Clinton for wrongful death and defamation.

The suit claimed the former secretary of state's use of a private email server contributed to their sons' deaths by exposing their details to the attackers.

The parents also accused her of defaming them in statements to the media.

But federal judge Amy Berman Jackson ruled that Mrs Clinton was acting in her official capacity while using her private email server, so the US government should be the defendant.

She also ruled that the parents should have raised, as legally required, their claims with the state department before launching their legal action. Because of this, she decided in favour of the government's motion to dismiss the counts against it.

She judged that the parents did not have enough evidence to substantiate their claim that Mrs Clinton had called them, or implied, that they were liars.

The al-Qaeda linked Ansar al-Sharia group emerged in Benghazi - Libya's second largest city - in the upheavals following the death of Libyan leader Muammar Gaddafi in 2011. At one point in 2014 they took control of the city.

But the group suffered heavy casualties while fending off continued offences launched by Libyan National Army strongman Khalifa Haftar - who earlier this month repeated his efforts to drive jihadist fighters out of their two remaining strongholds in Benghazi.

The online announcement of Ansar's formal disbandment called on Islamists to form a united front in Benghazi.
Libya now has two rival parliaments and three governments. The bulk of the fighting is between the Libyan National Army and forces aligned with the UN-backed Government of National Accord (GNA) in Tripoli.