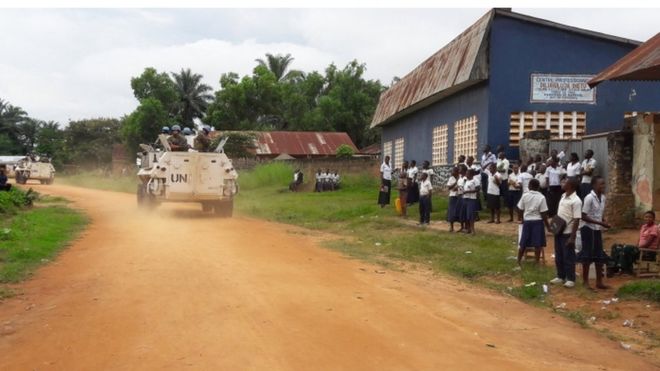 Militia fighters in DR Congo have decapitated about 40 police officers in an ambush in the central province of Kasai, local officials say.

Fighters from the Kamwina Nsapu group attacked a police convoy.

Six policemen who spoke the local Tshiluba were freed, but the rest were killed, Kasai Assembly President Francois Kalamba said.

The state Governor Alexis Nkande Myopompa said an investigation had been launched into the killings.

The UN says 400 people have been killed and 200,000 displaced in the Kasai region since Jean-Pierre Pandi, the Kamwina Nsapu leader, was killed.

This came two months after Kamwina Nsapu launched a bid, in June 2016, for him to be officially recognised as a local chief and for state bodies to withdraw from the region.

The UN says it has identified 10 mass graves where those killed in the unrest have been buried, as well as another seven suspected mass burial sites.

Two UN experts, an American and a Swede, were kidnapped in the area two weeks ago with four Congolese colleagues and are still missing.

DR Congo is in a state of increasing political uncertainty as President Joseph Kabila remains in power beyond the end of his mandate ,which expired last December.

Elections are now due to be held before the end of this year, but no firm date has been set.