South Sudan soldiers on trial over rape of aid workers 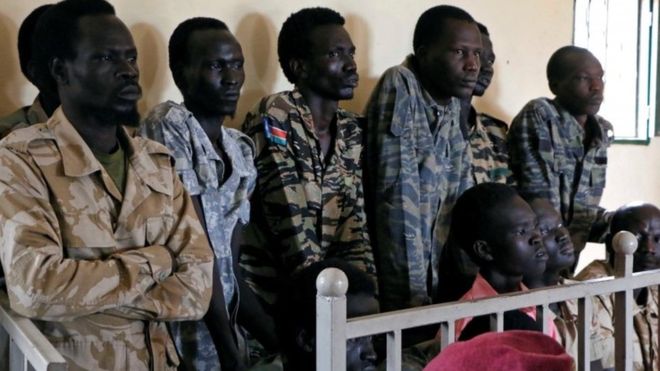 Share
Thirteen South Sudanese soldiers have gone on trial accused of raping foreign aid workers and murdering their local colleague. The incident in the capital, Juba, last July resulted in a UN report which accused UN peacekeepers of failing in their duty to protect civilians.
It happened as rival forces in the civil war clashed in the city.
The soldiers' lawyer said the allegations were untrue, Reuters news agency reports.
The incident happened in a rebel-controlled area, he added
Peace efforts have failed to bring an end to the three-and-a-half-year-old conflict, which has seen forces loyal to President Salva Kiir fighting troops who back former Vice-President Riek Machar.
The trial concerns an attack on the Terrain Hotel, home to aid workers from a number of international organisations.
Its manager, Mike Woodward, has been giving evidence at the military court in Juba, Reuters reports.
Between 50 and 100 soldiers entered the compound, looted the place and then raped five women, he is quoted as saying.
The defence lawyer says the compound was in a rebel-held part of the city, implying that government troops could not have been responsible.
Some of the victims have given harrowing testimony to the BBC. They spoke of what had happened to them and said their calls for help from the UN had gone unanswered.
A UN investigation backed their claims that peacekeepers had refused to respond when the compound was attacked.
The incident happened during three days of fighting in which at least 73 people were killed, including more than 20 internally displaced people who had sought UN protection. Two peacekeepers also died.
The government has been under pressure to tackle sexual violence against women, which is widespread, BBC South Sudan expert James Copnall says.
The overwhelming majority of victims are South Sudanese, and so far there seems to be little progress made in bringing the perpetrators of those crimes to justice.
In the civil war, tens of thousands of people have died and millions have been displaced.
Â
BBC
Â