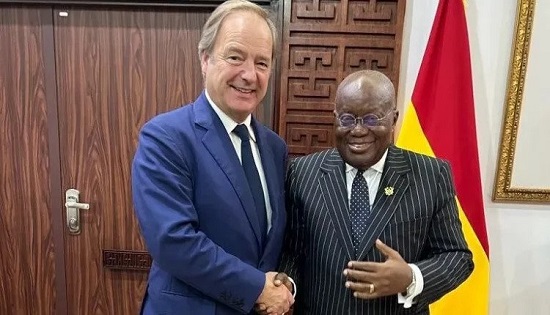 This comes after the President paid a courtesy call to His Majesty King Charles III, Head of the Commonwealth, in Windsor, UK.

While welcoming Lord Swire to Jubilee House – the seat of Government, the President reiterated Ghana’s integral role in the formation of the modern Commonwealth. He also emphasised Ghana’s continued commitment to the tenets and goals of the Commonwealth.

On his part, the Right Honourable Lord Swire thanked the President for his participation at the recently ended Commonwealth Busines Forum, which was organised by CWEIC at the 2022 Commonwealth Heads of Government Meeting. He also updated the President on the invitation and acceptance of the Ghana Investment Promotion Centre to the CWEIC council, and the creation of new country hubs in Eastern Africa, Central Africa and the Caribbean.

Lord Swire also took the opportunity to meet senior business leaders at a private breakfast meeting at Movenpick Ambassador Hotel with the CWEIC Head of Mission, John Apea, and Country Director, Ben Cobblah. At the meeting, Lord Swire commented on the benefits of the Commonwealth advantage to countries and businesses within the Commonwealth:

“While not a trading bloc, the Commonwealth advantage enables member-countries to trade up to 20 percent more with each other than with non-members, at a 21 percent lower cost on average.”

Commenting on his visit, Lord Swire said: “I am extremely excited to visit CWEIC’s two hubs in Ghana and Nigeria. It is important to note that sub-Saharan Africa, like the Commonwealth, has the youngest population in the world, with approximately two thirds of the population being under the age of 30. CWEICs work in galvanising the private sector within the Commonwealth is extremely important at this time”.

Ghana and Nigeria are extremely important CWEIC hubs and provide evidence of CWEICs work in enabling our strategic partners in benefitting from the advantage that the Commonwealth provides.