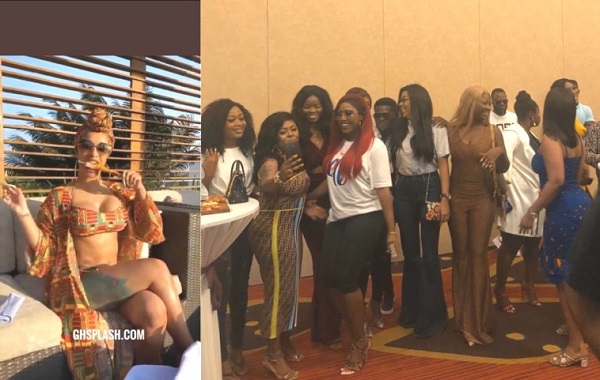 Socialite Moesha Boduong has apologized to Ghanaians for the comments she made after the Cardi B brouhaha.

An angry Moesha on Tuesday took to social media to jab the entire citizenry for trolling her as well as her colleague female celebrities after news broke that Cardi B stood them up for six hours.

â€œYou are laughing today right? Tomorrow, it will be your turn and you will see what our own Ghanaians will do to you. Ghanaians destroy their own. Whatâ€™s the big deal about this? Is anyone saying that if they were invited to meet Cardi B, they wonâ€™t show up? Ghanaians are so dumb. Why do we pride in destroying ourselves? Fucked up country and fucked up citizens,â€ her post read.

Her comments received negative reactions from a section of Ghanaians who described it as 'reckless'.

Moesha, however, speaking to MzGee on 3FMâ€™s ShowBuzz, indicated that she was sorry for making such a sweeping statement.

â€œSome of my colleagues were laughing and writing things on social media. Thatâ€™s what got me angry. I didnâ€™t mean everyone but most people are very hateful in Ghana, we like to bring each other downâ€¦ Iâ€™m gonna come out and apologise to everyone,â€ she said, while stressing that the trolls were needless.

Background
American rapper Cardi B arrived in Ghana on Sunday afternoon for a concert that night. According to reports, she was expected to have had a â€˜meet and greetâ€™ session with some selected female celebrities and the media.

However, after waiting for hours, the American star had not showed up. While waiting, a video of Cardi B relaxed by the poolside with a khebab in hand was posted on the rapperâ€™s Instagram page. This irked some of the Ghanaian celebrities including Hajia4Real, Afia Schwarzenegger and Wendy Shay as they took to social media to express their fury.

They argued that it was embarrassing to have waited from 12 pm to 5.30 pm, only to be told the Grammy Award winner will be ready at 8.30 pm.

Cardi B in reaction said apart from not being in the known of the scheduled meeting, she had a stomach upset and was trying to deal with it before her performance at the Accra Sports Stadium.