Video: Ogidi Brown explains why he signed new artiste with schnapps and eggs 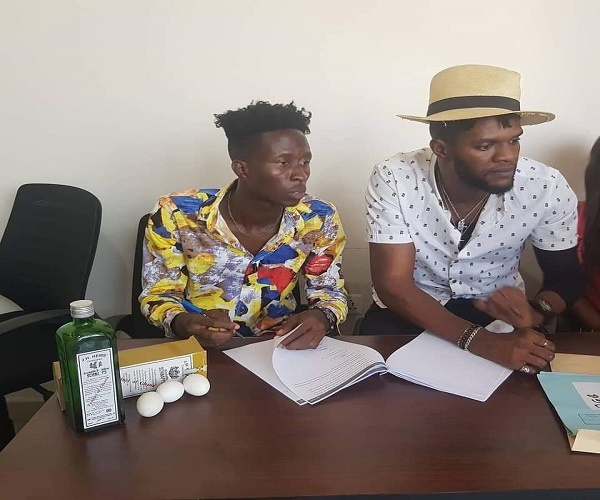 Chief Executive Officer of OGB music Ogidi Brown has explained why he signed a new artiste with bottles of schnapps and eggs.

It was a strange sight on Monday, December 30, 2019, as many were left speechless when the pictures surfaced on social media.

Ogidi Brown signed new artiste known as Cryme Officer and says the schnapps and eggs, is intended to invoke curses on any of the partners in the agreement who will betray the other.

READ ALSO: VIDEO : Fameye in a brawl with his management in Europe

Like the adage ‘once bitten, twice shy’, Ogidi Brown, said in an interview with MzGee that based on the unfair treatment meted out to him by Fameye his artiste, who despite having a five-year-contract with the label has rebelled, it was prudent to resort to tradition in the signing of a new artiste.

He argued that people are mindful of their actions when the ‘gods’ are involved in agreements between them and others than mere documentation.

“I know each and everyone knows that in Ghana, we have this tradition that exits. This time around, I decided to bring it in for each and every one doing the signing to see that we’re serious. It’s not a joke,” he said.

“People sometimes take advantage of certain things even in the church. They take things for granted but this tradition is tried and tested. People are scared of breaking it because of the consequence. Once it’s a contract, there has to be something to guides us all,” Ogidi Brown added.

He expressed bitterness with respect to how Fameye has spat on the label, stressing that he least expected such a rebellious attitude from someone he unflinchingly supported without thinking twice.

“He [Fameye] is still under OGB Music. We have a five-year-contract with him. It’s still running but he’s doing his own thing for now. I don’t even know his whereabouts so I have to bring in another artiste,” Ogidi Brown mentioned.

The misunderstanding between Fameye and his management started as mere speculations until a video clip emerged, suggesting the artiste had slapped Ogidi Brown. Fameye refuted the claims as he argued that he only smashed the phone that was being used to capture his fury.

He later apologized to Ogidi Brown who later took to his Instagram page and announced to the general public that he had forgiven Fameye.

But after apology, their relationship seems not to have been cordial.