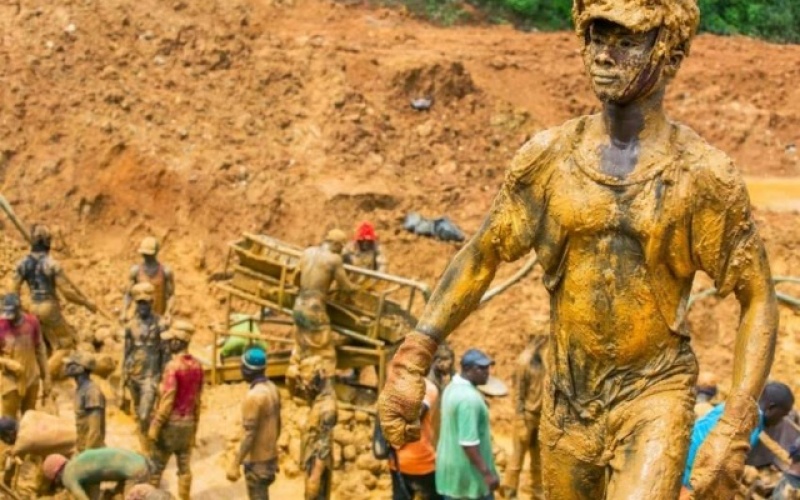 The Operation Vanguard arrested 18 illegal miners along the Ayanfuri-Bibiani road between Thursday June 14 and Friday, June 15 2018.

The operations were led by the Commander Operation Vanguard, Col Michael Amoah Ayisi and it was involved personnel from Ashanti, Central and Eastern Forward Operating Bases (FOB).

The operation, which started on Thursday, continued till early hours on Friday June 15, 2018.

Some of the communities the operations were carried through include; Ayanfuri, Brofoyedu, Abora, Breman, Treposo, Dominase, Adaboe, Diaso all in Upper Denkyira West District of the Central Region.

The team also extended the operations to illegal mining sites in Bibiani Awaso in Sewfi Bibiani-Anhwaiso-Bekwai District of the Western Region.Â

On the South and West, it is bordered respectively by Wassa-Amefi and Sefwi Wiawso District in the Western Region

Suspects and items were handed over to the Atakyem Police Station in Dunkwa-On-Offin for further investigations and possible prosecution.

Â Eastern FOB on Thursday, June 14, 2018 conducted operations to illegal mining sites at Asamama and Banso in the Atiwa District.

On Saturday June 16, 2018, the Central FOB conducted operations to illegal mining sites within the general area of Breman and Treposo in the Upper Denkyira West District.

The Public Relations Officer of the Operation Vanguard, Squadron Leader Robison Omane Agyei, therefore expressed appreciations to residents for their support in fighting against illegal mining in the country.

â€œThe Operation Vanguard (OV) is very much grateful to the general public for the information about illegal miners that they provide to the Joint Task Force. Let us all support to save the environment for today and the future. OV wishes for the general public to take note of the new modus operandi the illegal miners are using and feed us with information on themâ€, he added.

â€œThey apply chemicals such as cyanide, mercury and others. Â These chemicals are disposed off right in our immediate environment. Human, livestock, poultry, water, the air we breathe are all exposed to these chemicals. When living things come into contact with these chemicals it exposes them to various illnesses. silicosis, silico-tuberculosis, pulmonary tuberculosis (TB), obstructive airways disease, occupational asthma, oral and/or nasal cavity erosion, diseases owing to ionizing radiation, noise-induced hearing loss, whole body and hand-arm vibration syndrome, as well as repetitive strain injuries.

Squadron Leader Omane Agyei â€œappealed to the general public to assist Operation Vanguard to save our environment of these dangerous chemicals.Â  We entreat the public to feed us with information on where these Chinese illegal miners reside for proper monitoring to save our immediate environmentâ€.