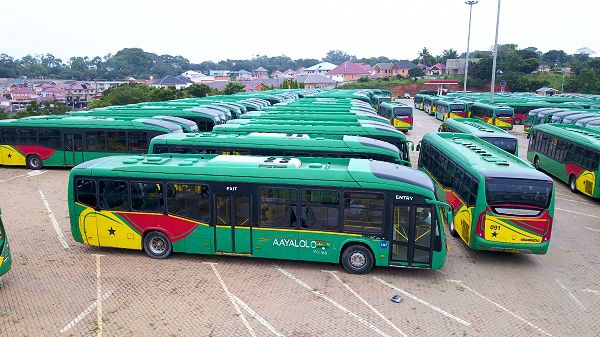 Drivers of the Quality Bus System, popularly known as Aayalolo have suspended their sit-down strike, barely 24 hours after it began.

The drivers who were demanding eight months salary arrears say they rescinded the decision after a promise by the management of the company to allow them meet the Chief Executive Officer (CEO) next Monday.

However speaking to Citi FM, Executive Member of the Aayalolo Drivers Union, Matthew Agbesi said they wonâ€™t hesitate to lay down their tools once again if their demands are not met.

â€œYesterday, our management came to us and laid out the terms that by Friday or Monday, they will solve our problems for us. So based on that, we have called off our sit-down strike. But we are waiting to see if they will fulfil or fail with their promise.

â€œThe concerns of the drivers and workers are that the operation of Aayalolo must be well organized. Since we began work, it has been poorly managed and we do not want to see the company shut down. So on Monday, we will meet the CEO for the way forward because we do not want to meet the Labour Commission againâ€, he added.

Managers of Aayalolo had earlier appealed to their drivers to call off their strike and return to work.

According to the Greater Accra Passenger Transport Executive (GAPTE), adequate measures are being put in place to get issues of driversâ€™ salary arrears resolved.

In an interview with Citi FM, Director of Communication at GAPTE, Fred Chidi said his outfit will not relent on its efforts to have the situation addressed.

â€œWe are appealing to them that they should rescind their decision to embark on this sit down strike. We are appealing to them to go back behind their steering wheels to move thousands of commuters from the city to their homes and vice versa as they do every morning. So it is just an appeal to them. We admit that we owe them. We are making every effort to ensure that they are paid,â€ he said.