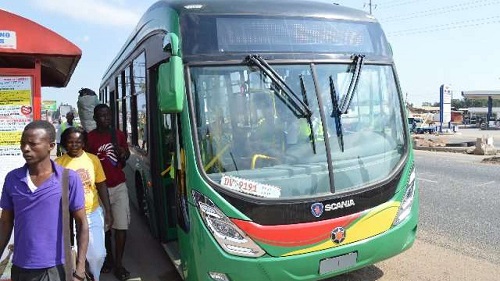 Drivers of the Quality Bus System commonly referred to as Aayalolo have begun their indefinite sit-down strike today Monday, February 24.

According to Citi FM's report, there has been little activity at the terminal in Accra. Some of the drivers said they heard management is in a meeting but until they are paid they will not work.

"We have begun our sit down strike, the practice is that you come here in the morning then you load and go back so we have just begun our strike, we spoke to management and they are saying they are in a meeting and after they will proceed to respond."

The drivers are striking in spite of the National Labour Commissionâ€™s directive for them to rescind their decision and resort to other alternatives.

They said they wonâ€™t budge until their claims are settled.

â€œWe have some allowances that have not been paid for about seven months now. They came in December and promised us payment for two months but they said they didnâ€™t have the money so they gave us one monthâ€™s payment which was done on December 24th. They promised to pay us in February but up to date, when they come, they say thereâ€™s no money. But weâ€™re making money [for the company]. We have school fees to pay. Some of them have been ejected from their homes and have been sleeping in the terminals,â€ Amidu Awudu, one of the aggrieved drivers said.