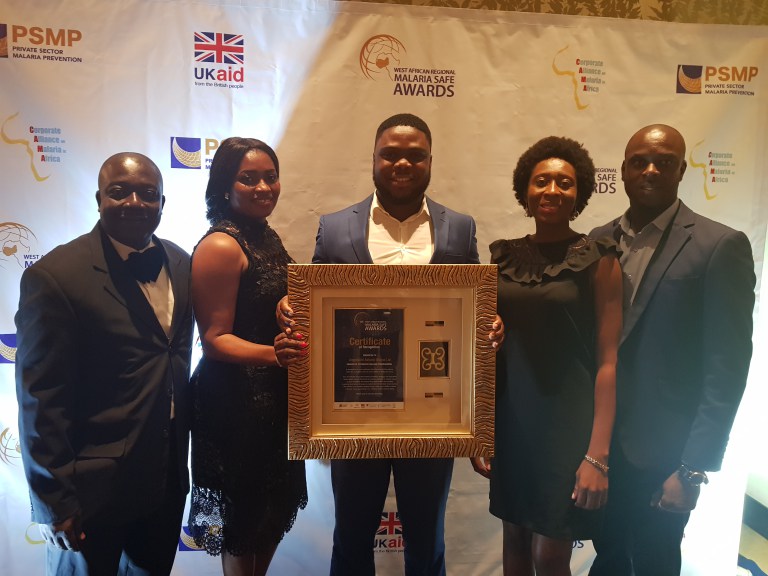 AngloGold Ashanti - AGA Obuasi Mine has been recognized for its contribution to the fight against malaria in the country. AGA’s award was under the Innovative Integrated Malaria Programming category, awarded by the Private Sector Malaria Prevention Project (PSMP) at the West Africa Regional Malaria Safe Awards, held at the plush Kempinski Hotel Gold Coast City, Accra on 5TH April 2018.

The Awards was to show appreciation to companies and individuals who are helping to eliminate malaria in the West African region and to encourage more companies to participate in the fight against the disease in the region.

AngloGold Ashanti (AGA) Obuasi Mine in 2006 established the AngloGold Ashanti Malaria Control program as a corporate social responsibility program to help solve malaria epidemic that was having a significant burden on the organization’s productivity, community health and family well-being.

AngloGold Ashanti (Ghana) Malaria Control limited (AGAMal) a wholly owned subsidiary of AGA was established with the coming on board of the Global Fund's contribution to expanding the malaria program beyond Obuasi Municipality. 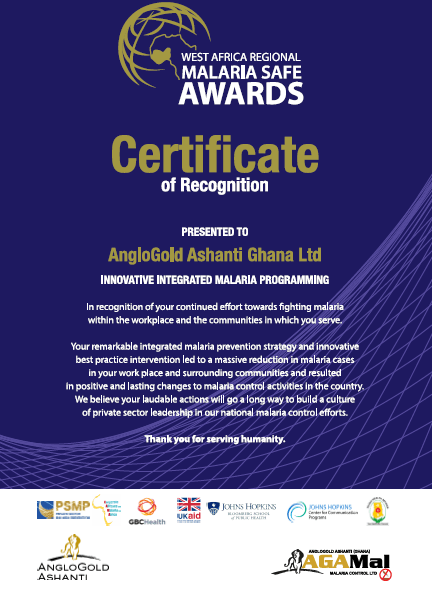 To date, AGAMal has expanded its operation to cover the entire 11 districts in Upper West region, 3 districts in Upper East in addition to Obuasi municipality with support from the Global Fund and AngloGold Ashanti and in partnership with National Malaria Control Program (NMCP), various District Health Management Teams (DHMT) and Ghana Health Service (GHS).

A citation accompanying the award read “your remarkable integrated malaria prevention strategy and innovative best practice intervention led to a massive reduction in malaria cases in your workplace and surrounding communities and resulted in positive and lasting changes to malaria control activities in the country”.

The citation added, “We believe your laudable actions will go a long way to build a culture of private sector leadership in our national malaria control efforts”.

Commenting on the award, the General Manager and Managing Director of the AGA Obuasi Mine, Eric Asubonteng said the mine was very committed to continuously improving the lives of its employees and host communities in line with its cherished value of making the communities in which it leaves better off for it being there. We are encouraged and delighted at the remarkable results this intervention has achieved in improving the social and economic lives of Ghanaians,” he said.

The Program Director of AGAMal, Mr. Samuel Asiedu said, “our recognition calls for greater responsibility. We will work harder with our partners to push for pre-elimination of malaria within our operational areas. “

Mr. Steve Knowles, the first program Director of AGAMal was acknowledged and given a lifetime award in recognition of his immense contribution to the fight against malaria for about a decade in Ghana.