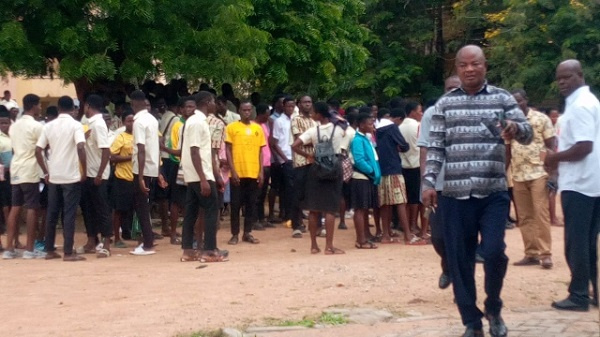 The Bolgatanga Technical Institute (BOTECH) was Tuesday temporarily closed down following violent protests by some students of the school.

The protesters, made up of final year students who are taking part in the ongoing West Africa Secondary School Certificate Examination (WASSCE) and second year students numbering 1,461, were asked to vacate the school by 4 p.m.

However, the final year students would be allowed to come to the school compound when they have a paper to write and immediately leave after writing their respective papers, an arrangement which would remain till the end of the examinations.

The Upper East Regional Minister, Stephen Yakubu, announced the decision when he led some members of the Regional Security Council (REGSEC) to assess the situation in the school as a result of a violent protest by the students yesterday.

Mr Yakubu said the decision to temporarily shut down the school was to protect lives and properties and prevent the rampaging students from further destruction of government and personal properties.

He said, “as REGSEC, we decided to close down the school in order not to jeopardise the security situation in the school”, adding, “henceforth, personnel of the Ghana Police Service would patrol the compound until the reopening of the school.”

He called on the students to be disciplined and desist from taking the law into their hands when they had grievances, stressing “this is totally unacceptable for young people like you to go on a rampage and destroy properties''.

The minister further indicated that after assessment, all damages to the school and personal properties will be paid for by the students.

The Principal of the school, Zachary Yorose, said four students and two teachers, a national service person and the head of the engineering department, were picked up by officials of the National Intelligence Bureau (NIB), for indulging in examination malpractice.

He stated that the final year students then came out regularly under the guise of going to use the washroom to sneak out to look at the answers and returned to the examination hall with the answers to write them in their answer booklets.

He added that officials of the NIB got wind of the malpractice and stormed the school to arrest the two second year students who mentioned the two teachers and they were all rounded up and sent to the offices of the NIB for questioning.

Subsequently, the invigilators stamped their authority and decided not to allow the students out of the examination hall, which angered the students who decided to vent their anger on their teachers.

The principal, in the company of other management members of the institute, managed to secure bail for the students and teachers taken into NIB custody and they were asked to report today for further interrogations.

The students, mostly male, who had already planned the incident, suddenly went on a rampage yesterday morning around 10:00 a.m. and pelted the teachers with stones, resulting in some of the teachers taking cover in the library and the staff common room.

The angry students blocked the main entrance to the school, as well as the main Bolgatanga-Navrongo road, which prevented motorists and other road users from using that stretch of the road during the demonstration.

Personnel of the police service were subsequently called in to disperse them and control the situation but they turned their anger on the police and pelted them with stones, leading to damage to the riot control van.

Warning shots were fired by the police to disperse the students but they ran into the school and destroyed seven vehicles and a number of motorbikes belonging to some teachers.

The disturbance brought academic activities in the school to a halt as teachers and second year students who were supposed to have classes abandoned the classrooms to run for their lives in the ensuing melee.

When the Daily Graphic got to the school around 12:30 p.m. yesterday, many of the students, together with some teachers who were being provided police protection had abandoned academic work and had gathered in groups around the school’s entrance discussing the unfortunate incident.

In an interview, some of them expressed worry about the closure as they did not have money on them to travel long distances to their various hometowns.