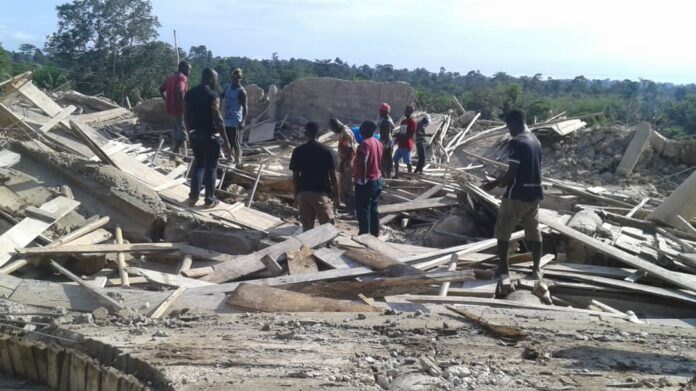 The death toll from the collapsed of an uncompleted church building at Akyem Batabi is now sixteen.

Personnel from the military and NADMO have been deployed to help the rescue mission in the Eastern Region.

Nine persons were earlier reported dead after the uncompleted church building collapsed on the congregation.

The 3-storey building is under construction by the Church of Prosperity.

One eyewitness said on October 20, 2020, they were having a church service and after saying their closing prayer, they realized the building was coming down.

People started running out of the building and I managed to also get out, the building totally came down and I was blinded by the dust.

Reports say the ambulance service are at the scene and are yet to give an exact number of people affected but they say they still hear voices of persons trapped under the building and they are trying to rescue them.

Six have so far been confirmed dead with another six treated and discharged at the Oda Government Hospital.