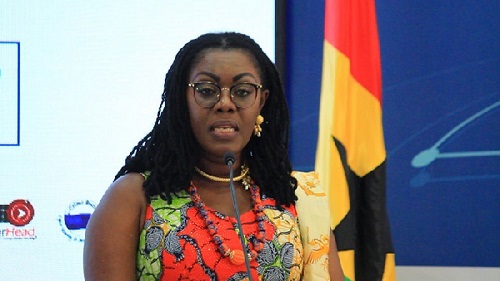 The Minister of Communications, Ursula Owusu-Ekuful has been sued for ordering the telecommunication companies to stop the upfront deductions of the 9% Communications Service Tax (CST).

The Minister was sued together with the Attorney General and the Mobile Telecommunications Networks by a private citizen called Dzifa Gunu.

In her writ, Dzifa Gunu argued that the Communications Minister’s directive to the telcos to cease giving upfront notifications on tax deductions made from purchased airtime is an interference with her right to information as a consumer or subscriber and “thus contravenes article 21(1) (f) of the 1992 Constitution and same is illegal and wrongful.”

The Communications Minister on October 11, 2019 ordered the telcos, through the National Communications Authority, to cease the instant deductions of the tax.

“To minimize the negative impact of the current mode of deduction of the CST, the Ministry of Communications hereby directs the immediate implementation of the following measure: CST should be treated the same way VAT, NHIL, GETFUND levy and all other taxes and levies imposed on entities doing business in Ghana are treated. This extraordinary upfront deduction of CST and notification of same to the subscribers must stop with immediate effect,” a statement from the Ministry directed.

But Dzifa Gunu argued in her writ that the proper institution to issue an administrative order on how a tax policy should be implemented is the Ghana Revenue Authority “within the meaning of the Revenue Administration Act, 2009(Act 791) hence the directive by the Ministry that the CST should be treated like any other tax and or levy is illegal, unlawful as same is not one of the ‘qualifications’ contemplated under article 21(1)(f) of the 1992 Constitution.”

“A declaration that the tax policy order by the Minister of Communications that the CST should be treated like any other tax and or levy is illegal, unlawful and the usurpation of the powers of the Ghana Revenue Authority within the meaning of the Revenue Administration Act, 2009(Act 791).”

She also asked the court for an “an interim order directed at the Minister of Communications and the Attorney General restraining them from going ahead with the implementation of the directive in exhibit GT pending the final determination of this application.”

The Communication Service Tax which was introduced in 2008 was pegged at a rate of 6 percent payable by consumers of certain electronic communication services — but the Minister of Finance, Ken Ofori-Atta in his mid-year budget announced a 50 percent increment in the CST rate.

The upfront deductions provoked government with some members of the governing party claiming it was a deliberate effort by the telcos to cause disaffection for the government.

Telecommunication companies in Ghana have resolved to stop the upfront deductions of the Communications Service Tax (CST).

This new development was announced in a statement issued by the Ghana Chamber of Telecommunications.

According to the Chamber the telcos will rather apply the tax through a tariff adjustment programme which will take effect on November 26, 2019.

The Chamber in the statement explained that despite the arrangement to stop upfront deductions, the GRA will still calculate and account for the CST as an upfront charge.

“For the past few weeks, there have been several discussions on the implementation of the CST. The members of the Ghana Chamber of Telecommunications will like to reassure its customers that we have acted in good faith considering our intentions to engage all relevant agencies following the passage of the CST Amendment Law. The mobile industry considers the upfront deduction legal and implemented the current CST based on alignment with how the Ghana Revenue Authority (GRA) calculates and charges the CST.

“However, we understand stakeholders’ concerns and have aligned on the current agreement to implement a price increase to pass on the tax instead of upfront deductions. It is worth noting that despite this arrangement to stop upfront deductions, GRA will still calculate and account for the CST as an upfront charge.”