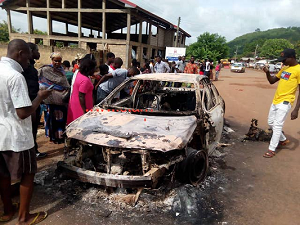 A mob at Huhunya has killed and set ablaze a suspected armed robber who was part of a gang that was escaping attack from a community they went to rob, having gunned down two irate youth pursuing them.

The robber was tied and burnt in the boot of the car they used for the robbery operation.

The bodies of the two deceased residents – Jerry Tettehfio and Aaron Padi Attarmah – have been deposited at the morgue at the Eastern Regional Hospital, Koforidua.

The charred body of the suspected robber who was driving the car with registration number GW 4151-19 has been taken by the police.

Information gathered indicates the robbery gang numbering about four went to steal goats from Tenguanya near Klo Agogo, a farming community in the area and were chased by some youth in the community. Another group in Huhunya mounted roadblock making it impossible for the robbers to escape.

The robbers shot two of the youth pursuing them on a motorbike and escaped through the bush, leaving the driver who was subsequently arrested. The youth then set him ablaze.

Assembly Member of Huhunya Joseph Anorhia confirmed the incident to Starr News. He said there has been an increase in goat theft in the area in recent times.