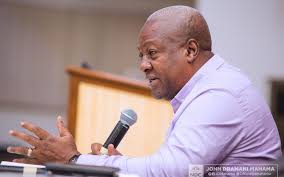 Former President John Mahama says Ghana became the country with the highest level of press freedom in Africa under his tenure.

Mahama in a World Freedom Day message said the press freedom is a huge contributing factor to our democracy.

He said even though the press freedom is curtailed under the Akufo-Addo government it is still important that we speak up against that act.

"During my tenure as President, we became the country with the highest level of press freedom in Africa, at that time we were ranked number one out of 54 countries in Africa, we were was also 23rd in the globla ranking out of 180 countries. Three and half years later we have slumed seven places on the global ranking and lost the number spot in Africa to Namibia and Cape Verde and this should worry us as Ghanaians".

He also called on Ghanaians to speak against what he describes as the dictatorial closure of radio stations by the Akufo-Addo government.

â€œLet us all protect the freedom of the press, let us condemn the killing of Ahmed Suale, as well as the harassment of Manasseh Azure and Edward Adeti. Let us rise up and speak against the dictatorial withdrawal of radio frequencies and closure of stations by the Akufo-Addo govâ€™tâ€.

Ghana is currently ranked 7th in Africa and 30th in the global ranking of countries with highest press freedom.

The United Nations General Assembly declared May 3 to be World Press Freedom Day or just World Press Day to raise awareness of the importance of freedom of the press and remind governments of their duty to respect and uphold the right to freedom of expression enshrined under Article 19 of the 1948 Universal Declaration of Human Rights and marking the anniversary of the Windhoek Declaration, a statement of free press principles put together by African newspaper journalists in Windhoek in 1991.