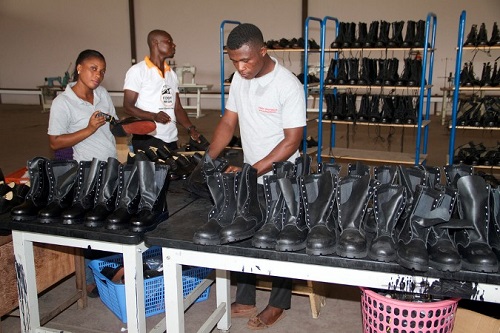 The management of the Kumasi Shoe Factory is considering closing the factory over the refusal of the security agencies, particularly the Ghana Armed Forces (GAF), to patronise its boots and shoes.

Nothing had changed since November 2017 when the management of the factory came out to lament the effects of the refusal of the state security agencies to patronise their products.

The development had led to the operations of the factory taking a nosedive.

When the Daily Graphic visited the factory in Kumasi last Friday, work had slowed down because boots and shoes which had earlier been produced for the security agencies were still yet to be purchased.

The workforce of 200 in 2012, when the company was resuscitated, had been slashed to 41 because there is little work to be done.

Few orders were being received from private individuals and entities.

Currently, the factory is producing about eight percent of its installed capacity of 700,000 pairs of security boots per annum.

The development has been compounded by the continuous piling up of electricity bills, VAT and import duties on raw materials.

Originally established in 1960, the factory, located on 35.75 acres, produced footwear and rubber sheets under an agreement signed by Ghana’s first President, Dr. Kwame Nkrumah, and Czechoslovakia in 1961.

In 2012, it was revived following a joint partnership between a Czech Republic-based company, Knights a.s., acting through its subsidiary, Knight Ghana Limited, and the Defence Industries Holding Company Limited (DIHOC), owned by the GAF.

The state security agencies — the Ghana Armed Forces (GAF), the Ghana Police Service, the Ghana National Fire Service (GNFS), the Ghana Prisons Service and the Ghana Immigration Service — which were supposed to buy from the company per a government directive in 2012, had resorted to the importation of boots and shoes from China and India.

The source expressed concern that assurances from the government to support the company by directing the state security agencies to purchase from them had not been fulfilled.

It said the products of the factory were of very high quality and wondered why the security services were failing to buy from them.

“None of the security agencies have raised any negative issues with our boots so it is surprising that they don’t want to buy from us,” the source said.

“All we have asked the government to do is to give a policy direction where no state security agency will import boots but channel that money to help expand the company. After all, the state has a 40 percent stake in the factory,” the source said.

The source appealed to the government to turn its attention to the factory and help expand it since it had the capacity to employ more than 2,000 people directly and also boost the One-District, One-factory initiative.

The Daily Graphic was unable to reach the GAF for their reaction, but a source at the Ghana Prisons Service told the Daily Graphic that somewhere in 2012, there was a directive from the Ministry for the Interior to the Service to buy boots and shoes from the factory.

However, the discussions between the service and the management of the factory for the procurement ended inconclusively due to some disagreements.

A source at the Ghana Immigration Service, on the other hand, stated that the Service bought a number of boots and shoes from the factory but had to stop when the personnel complained about the quality of the products.