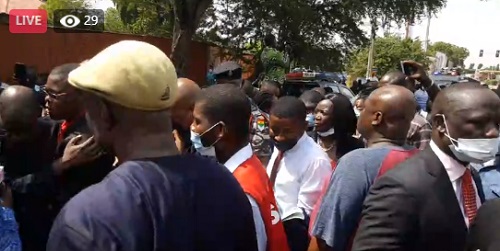 NDC MPs have vowed to boycott all activities of the EC in parliament.

Speaking to the media after the police prevented them from presenting their petition to the EC, Minority Leader Haruna Iddrisu said they will also boycott all appearances of the EC in parliament.

Reading out the petition, he said they will not accept the results of the Techiman South constituency because it was unlawfully declared in favour of the NPP.

Meanwhile, the Electoral Commission has announced it will break for the Christmas festivities on Wednesday, December 23, 2020.

The announcement comes in the wake of the street protests over the results of the December 7 Presidential and Parliamentary polls by the opposition National Democratic Congress.

The NDC has also pointed out some specific constituencies where they believe their parliamentary candidates won but have been robbed of victory through the commission’s declarations.