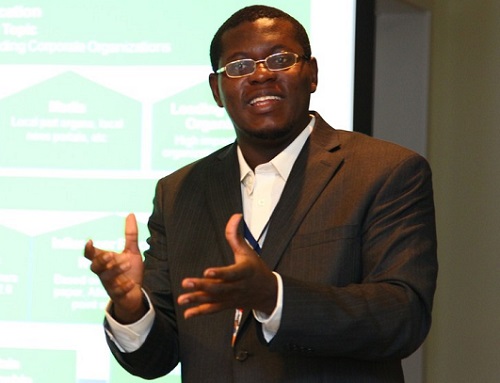 An honorary executive with Imani Africa, Bright Simons says the government's decision to ease Covid-19 restrictions is uninformed and has no scientific basis.

Bright Simons said there is no data to show why government decided to ease the Covid-19 restrictions.

President Akufo-Addo on Sunday announced that religious activities can commence from June 5, 2020.

He made the announcement in his 10th address to Ghanaians concerning measures the government has put in place to curb the spread of COVID-19.

Churches are also expected to disinfect and fumigate their premises regularly to ensure the safety of their congregants.

“An abridged format for religious services can commence. Twenty-five per cent (25%) attendance, with a maximum number of one hundred (100) congregants, can worship at a time in church or at the mosque, with a mandatory one-metre rule of social distancing between congregants. In addition to the mandatory wearing of masks for all persons at all times in churches and mosques, a register of names and contact details of all worshippers and handwashing facilities and sanitisers must be provided, with a maximum duration of one (1) hour for each service.

But speaking on Joy FM's 'NewsFile" after some churches have issued statement contrary to the directive from the government telling their members not to come to church, Bright Simons said it has become clear that most of the actions taken by the government are not backed by any scientific data.

"It's becoming clear that the anchors of policy the triggers for certain decisions are not very clear so we don't know for instance whether we looking at the particular infectivity ratio or a particular dynamic. So it has become obvious that the interminable postponements were no longer tenable because it is not clear at what stage you will start to loosen up restrictions and you couldn't communicate to people what the yardstick for those decisions would be. It has become apparent for a while now that we are relying largely on gut instincts..."

Bright Simons added that there is also no evidence that the restrictions are actually helping in the fight against the pandemic.

"It quite clear if you take the infections that we have recorded this week it about five times the infections that were recorded in the whole first month after the first case was recorded. There is no evidence or so ever that the restrictions that have been used so far are having the effects they should have and I had a sense that it gets to a point that it is not too clear what is driving the decision making then decretion, judgement, political instincts those kinds of becoming much more predominant so I wasn't so surprised because it wasn't clear to me anymore what the triggers for government's decision making were."

But the Deputy Director-General for Quality and Access at the Ghana Education Service, GES, Dr Kwabena Bempah Tandoh disagreed with the position of Bright Simons.

According to him, the government continues to use the science and the data available to make decisions and it cannot be true the ease of restrictions is out of gut instincts.

"Unfortunately for someone who is a big believer in data and the interpretation of data in decision making, your assertion is a bit worrying because from the very beginning President Akufo-Addo has made every decision based on data and he has informed everybody that his decisions are made on the science of the disease as well as the data available."