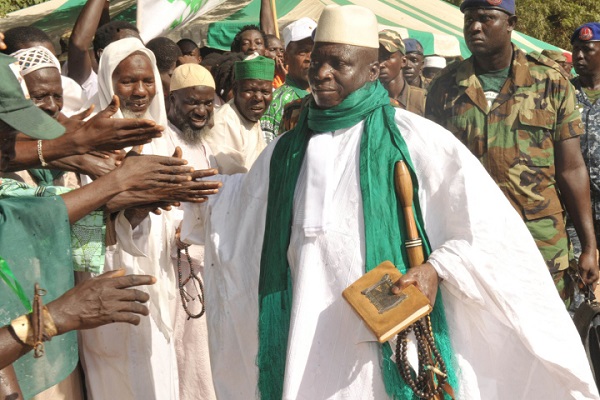 Two Gambian soldiers have opened up on the killing of some 44 Ghanaians and say they were ordered by then-President Yahaya Jammeh to carry out the execution.

The execution of some 44 Ghanaians happened in 2005 as some West African migrants who were in the country were murdered.

The two soldiers Lieutenant Malick Jatta and Corporal Omar A. Jallow revealed to Gambia’s Truth, Reconciliation and Reparations Commission (TRRC) that the migrants were executed by the “Junglers” squad, a paramilitary force that took orders from Jammeh, across the Gambian border in Senegalese territory.

“We were told they were mercenaries,” Jatta said, adding that he shot and killed one of the migrants. “I heard people shouting in the forest saying ‘save us Jesus.’”

"Our commander, Captain Tumbul Tamba was communicating to the former president, Yahya Jammeh, on the phone during the operation. He said to him, 'Yes Sir, Your Excellency,'"

Jatta told the commission his commanding officer later gave him an envelope containing dollars, which he said was a "sign of appreciation from the big man", a reference to Jammeh.

"I would be certain that it was from the former president. Tumbul had no source of gathering dollars," he said.

Up until his testimony, there was no known public confession or evidence tying the former president to the murder of the Ghanaians. Jammeh, now living in exile, has denied involvement in journalist Deyda Hydara's murder as well.

The confessions by Jatta and Jallow corroborate findings in a May 2018 report by Human Rights Watch and TRIAL that the migrants were murdered by the “Junglers.”

“It is now time to get to the bottom of Jammeh’s responsibility.” Jammeh is currently in Equatorial Guinea, where he sought exile after losing the 2016 presidential election to Adama Barrow.

It is now been reported that the government of Ghana said it was weighing re-opening its investigation into the July 2005 massacre since these confessions have come in.

A coalition of Ghana groups, led by the former Head of the Ghana Commission on Human Rights and Administrative, CHRAJ, Justice Emile Short, has called on the government to “expedite actions, steps; legal, political, diplomatic to make sure justice is served.”

Jammeh has always denied involvement in the killings.

In addition to Ghanaians, the massacre victims included citizens from Nigeria, Senegal, Togo, and Côte d’Ivoire.

On Monday, Jatta had confessed to involvement in 3 executions, including the killing of journalist Deyda Hydara in 2004.