Airbus scandal : All fingers point to John Mahama and he must respond - NPP (Video) 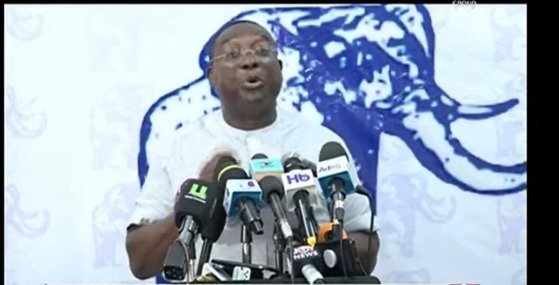 The New Patriotic Party (NPP) says all fingers allegedly points to John Mahama who was president at the time Airbus deal was struck.

They then branded in him as the â€œGovernment Official 1â€ mentioned in a bribery allegation involving European aviation giant, Airbus.

At a news conference in Accra today February 3, 2020, Communication Director of the party, Yaw Buabeng Asamoah, asked the former president to officially respond to the court documents.

â€œIn the face of these facts, it is very necessary for president Mahama to come out and be heard publicly,â€ Mr Buabeng Asamoah said.

â€œHe cannot continue to hide behind his party members including a former attorney general. Of course, we are all aware that he hates answering questions on corruption but he must answer because at this moment all fingers point to him and one of his brothersâ€

" He was the President at the time and presided over this deal so he has to come out and tell Ghanaians if he was involved or not".

Last week, Airbus entered into a deferred prosecution agreement, with the British Serious Fraud Office (SFO), which was investigating the company for bribing or failing to prevent corruption in transactions in five countries, including Ghana.

The mention of Ghana in the agreement has sparked a flurry of political activity with the opposition NDC issuing a statement denying that its officials in the erstwhile Mills and Mahama administrations were involved in any corruption with Airbus, which supplied military aircraft to Ghana in 2012.

The deferred prosecution agreement didnâ€™t specifically name any officials who might have been bribed or corrupted during Ghanaâ€™s negotiations with Airbus but it refers to personalities involved as Government Official 1 (a high-ranking elected public figure) and Intermediary 5 (a British national and close relative of Government Official 1), among others.

The governing New Patriotic Party believes that the person referred to as Government Official One is former President John Mahama.