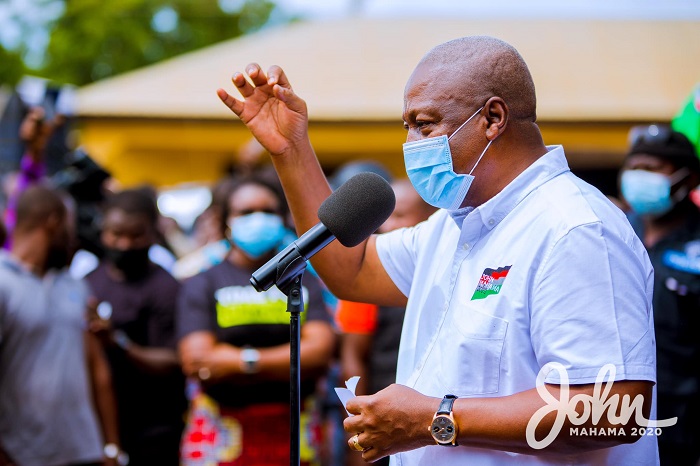 The flagbearer for the National Democratic Congress (NDC) John Mahama says the party is confident winning the 2020 election on December 7.

Mr Mahama says some polls conducted by the party has given them a lot of confidence going into the election.

He brushed off polls by some institutions that predicted victory for President Akufo-Addo and the New Patriotic Party (NPP).

The former President added that one of their polls clearly showed that the NDC will win most of the parliamentary seats.

"When you are cooking the polls, of course, they will point in your favour. You saw the example recently when people were paid to manufacture a fake poll saying the NPP were going to win, so there are a lot of polls that are manufactured. We have done our own polls and we are quite confident of a victory, one of our polling indicates that we are winning majority in parliament"

Currently, the New Patriotic Party (NPP) has majority in parliament with 169 members and the NDC which represents the minority has 106 members.

Meanwhile, the NDC has dismissed survey conducted by the Political Science Department of the University of Ghana predicting a win for Akufo-Addo in the 2020 election was influenced.

National Communications Officer of the NDC, Sammy Gyamfi said they have picked up information that indicates the NPP influenced the research.

He, therefore, rubbished the reports and said the NDC are focused on winning the election.

The survey predicted a 51.7 percent win for the incumbent New Patriotic Party (NPP), whilst the NDC followed with 40.4 percent of the total vote cast.