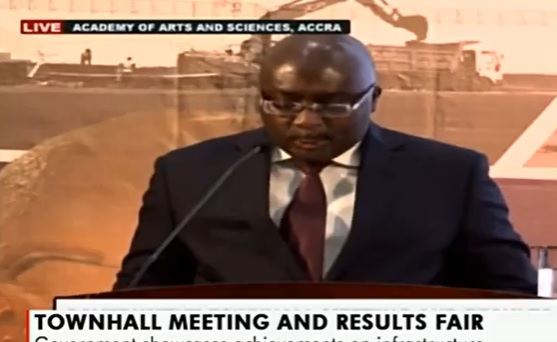 Vice president of the Republic of Ghana, Dr Mahamudu Bawumia briefed Ghanaians on the number of infrastructures and initiatives the New Patriotic Party (NPP) has put in place since taking over office from former president John Dramani Mahama.

The Vice President said sanitation in Ghana has improved so much that the country has not recorded any case of cholera in 3 years.

The event took place at the Academy of Arts and Sciences in Accra on August 18, 2020.

The Vice President said the construction of some household toilets by the government has improved sanitation and dealt with the issue of cholera.

"Under the toilets for all programme at least 109,000 households have been constructed benefiting 856,000 people and this is quiet remarkable. The population with toilet has increased from 14% in 2017 to 21% by 2019. Because of this 5,498 communities have been declared open defecation free. The Minister for Sanitation drew my attention that due to the investment we have not had cholera in the last 3 and half years".

Recently Sanitation Minister Cecilia Dapaah recently came under intense criticism for saying that government is 85% through with making Accra the cleanest city in Africa.

Some Ghanaians have cast doubt over this plan but the Minister for Sanitation Cecilia Dapaah speaking at after a sanitation tour on August 11, 2020, said 100% was achieved during the lockdown but alleges the odds have reduced due to human activities.