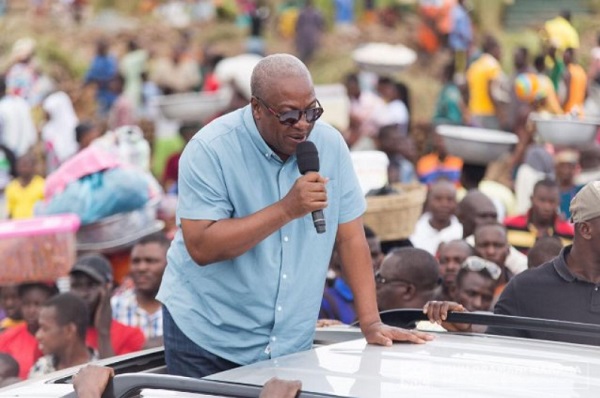 The flagbearer for the National Democratic Congress (NDC), John Dramani Mahama says he will clean up the mess that President Akufo-Addo has created if he is voted into power.

Addressing NDC supporters at Adjen Kojo as part of his five-day campaign tour of the Greater Accra Region, Mr Mahama said the mess that has been created by the NPP was shocking because his administration bequeathed to the governing party a very sound economy in 2017.

“Four years has come and we can make a judgement about what their performance has been. I mean for them to be able to say that they’ve fulfilled all their promises is the most laughable moment in Ghana’s history."

“We remember all the things that were said. They said that we were sitting on money but Ghanaians were hungry. Aren’t we hungrier today than we were in 2016?”

He reiterated his assertion that Ghana would be back to HIPC if the programme was still available due to the incessant borrowing.

“In the years when the HIPC programme was on, we would have been declared HIPC by now,” Mr Mahama said.

The former President continued that: “We are being handed over a weak economy. The last time I spoke, President Akufo-Addo said he inherited nothing, he inherited a mess and I minded him.

“I set up the Ghana Infrastructure Investment Fund and I put seed money of $270 million and I left it to President Akufo-Addo. Where is that money?

“When Covid happened, but for the stabilisation fund that was set up in my time, the 1.2 billion that they had to take out of the Covid fund to provide food for people, to provide PPE for people, to provide stimulus packages for people, if I hadn’t set up that fund so that any time we have a disaster or we have an external shock we can have money available to be able to withstand the shock, we wouldn’t have gotten that 1.2billion.

“How much is he going to leave to President Mahama in 2021? There’s nothing in the Ghana infrastructure fund, they’ve spent all of it.

“He has mortgaged the energy sector levy for the next 10-15 years, even the GETFund has been mortgaged for the next 10 years and so he is rather going to leave a mess to the new NDC government that is coming in 2021."

“But like I said, let us never give up hope because we are masters at turning things around, we will inherit a mess but by God’s grace we will turn things around.”