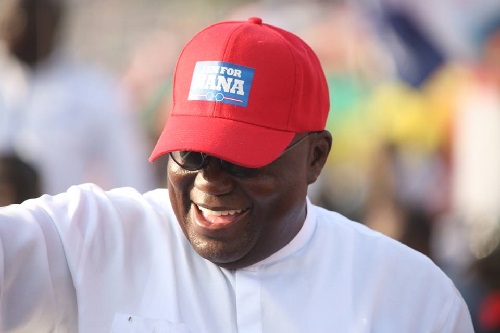 Ahead of his swearing-in on January 7, next year, President-elect, Nana Addo Dankwa Akufo-Addo is putting together a team of ministers to help him run the country efficiently.

As part of this, Mr Akufo-Addo was expected to present his list of potential ministers to the National Executive Committee (NEC) of the New Patriotic Party (NPP) for their perusal.

Though the meeting was inconclusive and was rescheduled after Nana Addo asked for more time, information we have gathered indicate that but for a few ministries, Nana Addo's list would have been ready by now.

According to our sources at Nana Addo's office, the president-elect is torn between the choice of Member of Parliament (MP) for Old Tafo Constituency in the Ashanti Region, Dr Anthony Akoto Osei and co-founder of Databank, Ken Ofori-Atta for the Ministry of Finance and Economic Planning (MoFEP).

While Dr Akoto Osei, a former Minister of State at the MoFEP in the Kufuor administration and now the ranking member of the Finance Committee of Parliament, is seen as an experienced hand, Mr Ofori-Atta who is also an accomplished economist is also highly regarded for his handling of the finances of the Akufo-Addo campaign.

For the Ministry of Youth and Sports (MOYS), the choice is between MP for Akuapem South in the Eastern Region, Osei Bonsu Amoah and MP for Wenchi in the Brong Ahafo Region Professor George Yaw Gyan-Baffour.

Mr Amoah, according to our sources, was highly tipped for the position having served as a deputy in that ministry between 2005-2009 but talks of merging the MOYS with the Ministry of Education seems to be swaying the position in favour of Prof Gyan-Baffour who also served as a Deputy Minister for MoFEP in under former President Kufuor.

MP for Manhyia South in the Ashanti Region, Dr Matthew Opoku Prempeh is said to have been pencilled for the Ministry of Health.

A medical doctor before venturing into mainstream politics, Dr Prempeh is expected to use his professional experience for the benefit the incoming government.

The problematic Ministry of Energy is expected to be put in the care of Mr Boakye Kyeremateng Agyarko.

Mr Agyarko who served as the Policy Adviser and Manifesto Committee Chairman of the NPP during the just-ended campaign has been at the forefront of his party's criticism of the National Democratic Congress (NDC) handling of the Energy sector especially the power crisis otherwise known as 'dumsor' and is widely viewed by Nana Addo's camp as capable of manning the ministry.

Also in the mix for an appointment, MP for Dormaa Central in the Brong Ahafo Regional and Chairman for the Public Accounts Committee (PAC), Kwaku Agyeman-Manu who is said to be on his way to the Ministry of Local Government and Rural Development.

Mr Agyeman-Manu has performed creditably as the PAC Chairman and is expected to come in with a wealth of experience having served as a deputy minister of Communications and Transport in the Kufuor administration.

READ ALSO: Ghana to get first female Chief of Staff as Frema Osei-Opare emerges as favourite for post