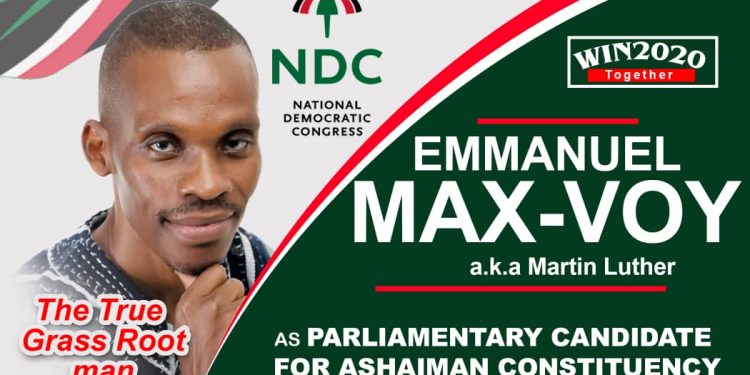 A parliamentary aspirant in the National Democratic Congress' (NDC) upcoming parliamentary primaries in the Ashaiman constituency Mr Emmanuel Max Voy has passed on days to the election.

Max Voy is said to have died at the Ridge Hospital where he was receiving treatment.

He was the only person challenging the candidature of the NDC incumbent MP for Ashaiman, Mr. Ernest Henry Norgbey.

He successfully filed his nomination about two weeks ago. The Ashaiman NDC constituency Secretary, Allan De-Graft Johnson, who confirmed the death of the aspirant to Citi News could not give further details except to say the party is yet to meet with the family of the late aspirant and would later officially communicate to the public the way forward.

“So far, the party is yet to meet up with the family to find out more on the death of our brother and comrade and we shall officially communicate to the public,” he added.

Meanwhile, Ernest Norgbey has suspended all his campaign activities over the death of his contender.

“Ernest Norgbey, in solidarity with the mourning of the death of his colleague and comrade, has decided to, with immediate effect, suspend all his campaign activities and accordingly, instruct all his teeming supporters to withdraw from circulating all forms of campaign materials and campaigning in order to show honour and respect to the departed soul of our late brother,” a statement from Mr. Norgbey’s campaign team stated.

Members of the NDC will be voting on August 24, 2019, to elect parliamentary candidates nationwide to represent them in the 2020 election.