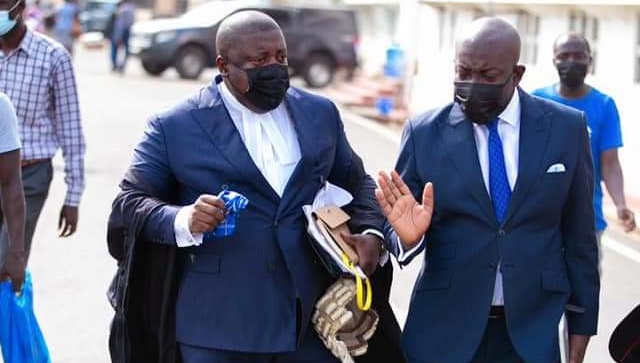 The New Patriotic Party (NPP) has quashed claims by the opposition National Democratic Congress (NDC) that Kojo Oppong Nkrumah and Henry Nana Boakye are inciting Justices of the Supreme Court against Dr Dominic Ayine a member of the legal team of the petitioner in the ongoing election 2020 petition.

The NDC in a press statement on Wednesday, February 17, 2021, accused Kojo Oppong Nkrumah, and Henry Nana Boakye of turning the Supreme Court Judges against the counsel for the Petitioner.

According to the NDC, the NPP team had used their media briefing after each court proceeding to launch attacks against the counsel for former President John Mahama and further incite the Court against the former Deputy Attorney General, Dr Dominic Ayine.

READ ALSO: I'm not one of the lawyers who think that they know better than the court - Akoto Ampaw

But according to the NPP, such claims must be rejected outrightly because they are “plain lies and without a shred of equivocation”.

“It is an affront to the apex court of the land for the NDC to suggest that the venerable, experienced and learned Justices of the Supreme Court (SC) who, over time, have demonstrated to be independent and objective are amenable to “incitement” by spokespersons of the 2nd Respondent,” a statement signed by Yaw Buaben Asamoa, National Communications Director, NPP, noted.

“The claim that Kojo Oppong-Nkrumah Esq. and Henry Nana Boakye Esq. seek to incite the SC against Dr Dominic Ayine is a blatant falsehood that must be rejected by Ghanaians,” Buaben Asamoa added.

The Supreme Court has instituted contempt proceedings against, Dr Dominic Ayine who is reported to have accused the seven-member Supreme Court panel adjudicating the petition of having a “predetermined agenda” to rule against the petitioner (John Dramani Mahama) in his action challenging the constitutionality of the re-election of President Akufo-Addo for a second term in office.