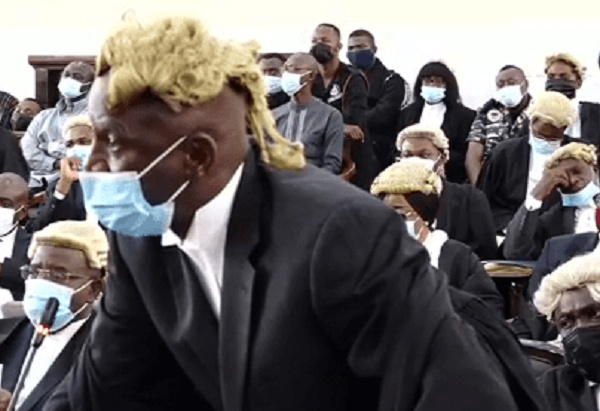 Lawyer Akoto Ampaw, the lead counsel for the 2nd respondent in the election petition hearing threw a subtle jab during proceedings in Supreme Court.

Lawyer Akoto Ampaw during one of the court arguments on February 18, 2021, told the court he was he not trying to act like he knew better than them.

This was after he was asked by one of the Justices, Gertrude Torkornoo whether he was instructing the court on what to do.

But in response, Mr Akoto Ampaw said: “No, I am not one of the lawyers who think that they know better than the court.”

In a ruling today, a nine-member review panel of the court held that lawyers for Mr Mahama failed to meet the criteria for review as stipulated by law, reports Emmanuel Ebo Hawkson.

According to the court, the petitioner did not raise any new points, neither did he provide any exceptional circumstance for which the court should review its ruling on February 11.

Counsel for the petitioner, Mr Tsatsu Tsikata, had argued that the court should review its decision because Mrs Mensa had made statements in her affidavits that she will testify.

He argued that the court did not make reference to Section 26 of the evidence Act, which made it a must for Mrs Mensa to testify based on the representations she made.

Counsel also submitted that his client wanted Mrs Mensa to testify not because they wanted the court to compel the EC to adduce evidence, but because Mrs Mensa had made representations in her affidavits to testify.

Also, counsel argued that Mrs Mensa as the Chairperson of the EC must testify in the interest of justice due to the fact she declared the 2020 presidential election results.

Mr Justin Amenuvor, lawyer for the EC, argued that the review did not meet the criteria as it did not raise any new issue.

He said the petitioner was using the review as a backdoor attempt to reargue his case for the EC Chairperson to testify.

The hearing has been adjourned to Monday, February 22, 2021