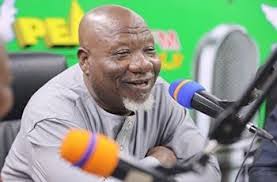 He also said the elements in the party must recognize the influence of founder Jerry John Rawlings and make sure he participates fully in their activities and that will make the party whole again.

Allotey Jacobs who has been suspended by the party speaking on Asempa FM's Ekosiisen on August 19, 2020, said this is the only way he will also back the party fully.

"NDC should stand up for Jerry John Rawlings and I am appealing to Nana Konadu Agyemang Rawlings to come back, NDC will be full. She should drop her party and come back. I will stand with Rawlings so far as he is the founder. When Rawlings was criticizing Mills I stood with Mills but I advised him and never insulted Rawlings."

Nana Konadu Agyeman Rawlings had been a 2011 rival of Atta Mills prior to his re-nomination as the NDC candidate for president. The NDP announced its formation as part of the opposition to the NDC's candidate.

For former President Jerry John Rawlings there have been several talks of him falling out with some elements in the party which has seen him take a back seat and not too much involved in the party's affairs.