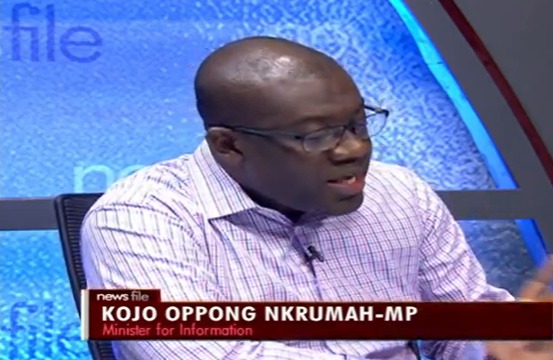 The Minister for Information Kojo Oppong Nkrumah says the Minority's decision to walk out of Parliament during the 2020 State of the Nation Address is unaccepted and undermines our democracy.

The Minority gave a number of reasons for their action and said the number one reason is oppression by President Akufo-Addo.

They then referred the Majority to 2013 when they were the Minority and how they boycotted then President Mahama's State of the Nation Address.

Mr. Oppong Nkrumah, however, believes that the NPP's action back in 2013 was on the right path as they were challenging the legitimacy of then-President Mahama.

"What happened in 2013 was remarkably different from what happened a few days ago. We boycotted because we were challenging the legitimacy of John Mahama as President, the case was in court and we did not want to undermine that, when the court ruled and said we were wrong, we went back to do business with Mahama and the NDC. But with the NDC, they are not challenging anything and the reasons they are giving does not add up. Even if the arguments the Minority made are valid, there are many legal platforms to express them. All of us should be very careful about the things that we do that has the potential to undermine our democracy. It was obvious that they wanted to do this," he spoke on Joy FM's NewsFile.

Clad in black, one after the other, the minority members of parliament â€˜angerlyâ€™ walked out of the chamber shortly after President Akufo-Addo took his seat to deliver the State of the Nation Address (SONA) on Thursday, February 20, 2020.

They held a presser shortly which was chaired byÂ Minority leader Haruna Iddrisu.Â They said their views and inputs into matters affecting the nation are often shelved by the Majority and that is not helping democracy in the country.