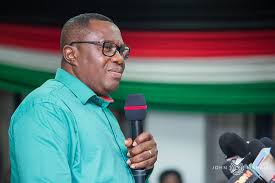 The National Chairman of the NDC, Samuel has through his lawyers declined the invitation of the Police CID over the recent fire outbreak and kidnappings.

In the letter to the Police Service, his lawyer Dr Dominic Akuritinga Ayine said, "it is common knowledge that our client and one other person are currently the subject of criminal proceedings in court in Criminal Case Number CR0385/2019 intituled The Republic v. Samuel Ofosu Ampofo & Anthony Kwaku Boahen. The charges against them arose of investigations your office claims to have undertaken into certain voice recordings after the violence-ridden Ayawaso West Wuogon bye-elections. You would recall that when your office claimed to have "intercepted" a tape, our client, upon honouring your invitation, was arrested and interrogated for several hours by your investigators on suspicion of having committed in the unconstitutionally obtained tape could not sustain the charge of kidnapping against our client, your office immediately dropped that charge."

"Having carefully reviewed your letter against the background of the ongoing prosecution of our client, we are unable to resist the conclusion that your invitation and so-called investigations into kidnapping, arson and other crimes is collateral to the on-going criminal trial, and that its purpose is partly to prejudice our client's defence. Further, our client's view the letter of invitation as reflective of an undeniable pattern of political harassment and intimidation which violates his fundamental human rights, particularly his constitutional rights to personal dignity and political association that is devoid of intimidation and harassment. On our part, while we appreciate that every citizen has a constitutional duty to assist law enforcement agencies in the discharge of their mandate, our considered view is that the current invitation constitutes a gross abuse of the investigative and prosecutorial powers of the police as a public institution. We take the respect view that since our client is not under arrest for the alleged offences, he is legally entitled to decline your invitation, we have therefore advised him accordingly," the letter added.

The Criminal Investigation Department of the Ghana Police Service has invited the NDC chairman Ofosu Ampofo to appear at the police headquarters on Thursday, May 9 over the recent fire outbreaks and kidnappings in the country.

According to the letter signed by the CID boss Maame Yaa Tiwaa and read on Asempa FM's Ekosiisen on Wednesday, May 8, the NDC chairman's name has been mentioned as being part of the grand scheme to cause fear and panic in the country.

Letter to the NDC chairman, Ofosu Ampofo reads, "the criminal investigations department of the Ghana Police Service has commenced investigations into cases of kidnapping and fire outbreaks in various parts of the country, intelligence gathered indicate that some of these kidnapping and fire outbreaks are being orchestrated by the various unidentified groups, persons and individuals, some of the persons picked up for interrogation and investigation have mentioned your name as part of a grand scheme design to cause fear and panic in the country " 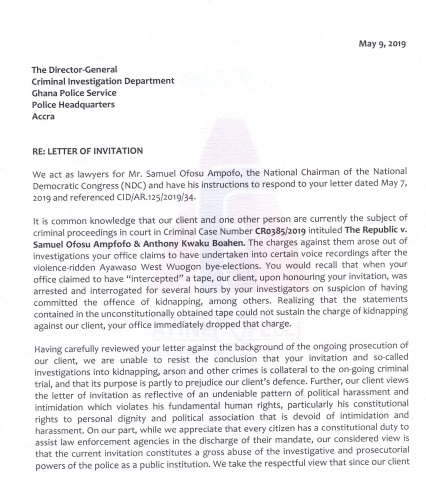 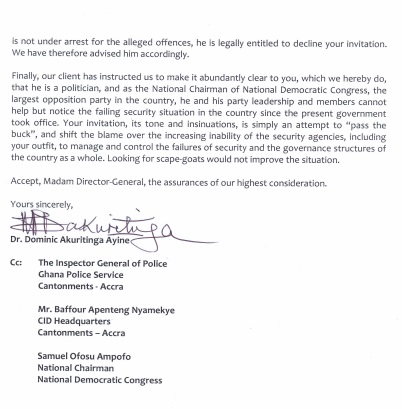