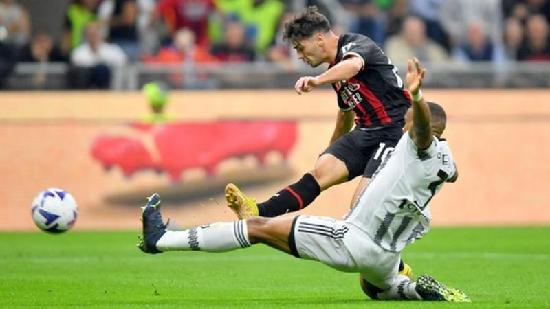 AC Milan warmed up for their Champions League rematch with Chelsea by easily beating Juventus 2-0 at the San Siro.

Stefano Pioli's side lost 3-0 in London on Wednesday and this was a perfect riposte as England centre-back Fikayo Tomori smashed in a confident opener.

The result moves Milan third in Serie A, level on points with leaders Napoli who play on Sunday.

Tomori had only scored one goal in Italy since joining Milan, initially on loan, in January 2021 but he showed great composure to blast past Wojciech Szczesny on the stroke of half-time.

He needed to, having inadvertently blocked Olivier Giroud's goal-bound strike. As the ball fell nicely off his body, he drove it high into the net.

Shortly after the break Diaz latched on to a loose pass from Dusan Vlahovic, seared through the Juve defence and fired in off the palms of Szczesny.

Ex-Liverpool striker Divock Origi could have made it three in injury time but Szczesny was equal to his effort.

Massimiliano Allegri's Juventus have struggled this season and are yet to win on their travels, but had at least started well, only to be overwhelmed by a resurgent Milan.

This was a very different side to the one that crumpled in London and Tuesday's Champions League tie is shaping up to be a tasty encounter.