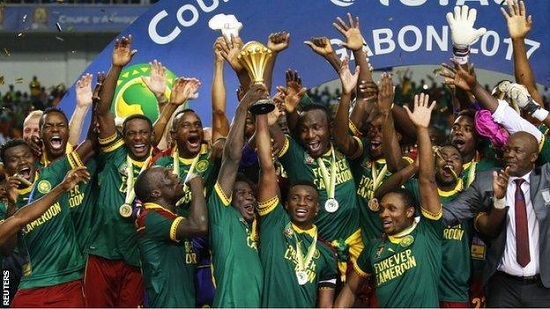 African football legend Roger Milla believes Cameroon's players "have what it takes" to retain their Africa Cup of Nations crown in Egypt.

Milla starred for Cameroon in 1984 when the Indomitable Lions sealed their maiden continental title before guiding the central Africans to their second triumph in 1988, as he won the tournament's best player prize.

The 67-year-old is upbeat about Cameroon's chances in Egypt but insists Cameroon's head coach Clarence Seedorf must be meticulous in his selections.

"Cameroon are the defending African champions. They have what it takes to retain the trophy. The team needs to work hard and get good results", Milla told BBC Sport ahead of the African showpiece event which kicks off on 21 June.

"Seedorf has great experience as a former player. At his prime, he was amongst the best in the world. He has played many top competitions and he knows what it takes to win big tournaments.

"He must make the right choices. He has to set up a team that will suit the attributes of his players. Cameroon must defend properly but also have a good attack line that can make the difference when things get tough."

The Indomitable lions are currently training at the prestigious facilities of Spanish heavyweights Real Madrid in Valdebebas with two friendlies lined up - against Zambia on 9 June and another against Spanish side AD Alcorcon on 10 June.

The squad will then jet off to Doha, Qatar for a second training camp from 11-16 June with a game against Mali on 14 June.

Some of Seedorf's recent selections have been heavily scrutinised by local press in Cameroon.

The Dutch tactician has been criticised for keeping faith in players who had little or no game time this season with their respective clubs.

Despite the backlash, Milla has thrown his support behind the team, calling on fans to be tolerant with Seedorf and his technical staff.

"In 2017, about ten players turned down call-ups to the national team and Cameroon travelled to Gabon with a core of inexperienced and not very popular players. Yet we ended up winning the competition.

"No-one believed we could even go past the group stages but the boys won the Cup. Fans have to be patient. Let's wait and see what they can do in Egypt.

"The group stage shouldn't be challenging for the Lions. Ghana, Benin and Guinea-Bissau are teams we've beaten in the past - be it during the Nations Cup or in qualifiers.

"We shouldn't be afraid of anyone. It's up to Seedorf and Kluivert to build a good team for the various games. So far, Seedorf has done a good job with qualifying the team but now is the most crucial part and he needs to live up to expectations.

"The ideal scenario will be for Cameroon to win their sixth trophy in Egypt and clinch a seventh in 2021 when the country stages the Africa Cup of Nations. This will be tough - but it's possible."

One of Africa's most successful players, Milla made his debut for Cameroon in 1973 in a World Cup qualifier against Zaire, present-day Democratic Republic of Congo, going on to score 37 goals in 63 appearances.

Milla gained global recognition during the 1990 World Cup in Italy where he scored four goals to help Cameroon become the first African side to reach the quarter-finals.

During the 1994 World cup, aged 42, Milla became the oldest goal-scorer in the tournament courtesy of his strike against Russia.

Named African footballer of the year in 1976 and 1990, the former Bastia, Montpellier and Tonnerre of Yaounde striker was named in 2007 as Caf's best African player of the last 50 years.