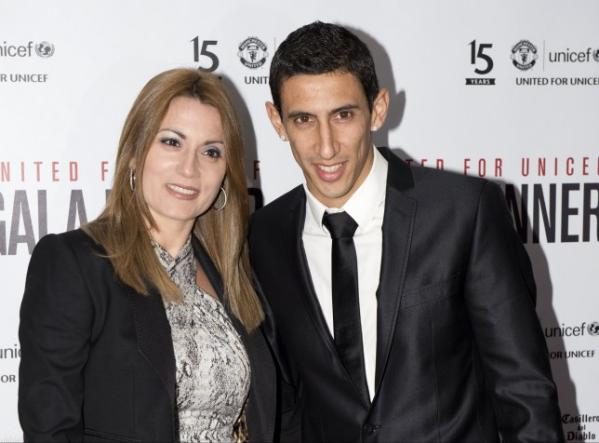 Angel Di Maria's wife has labelled Manchester a "s***hole", saying her husband only joined United for the money.

Jorgelina Cardoso moved to Manchester with Di Maria in 2014, after the Red Devils splashed out Â£60million to sign the Argentine from Real Madrid.

Di Maria was made one of the club's highest earners with a deal worth Â£175,000-a-week, and handed the legendary number seven shirt, previously worn by the likes of Eric Cantona and Cristiano Ronaldo.

But Di Maria flopped massively in the Premier League, and after 12 months was sold at a loss to Paris Saint-Germain.

Di Maria has had a bad relationship with the club ever since his failed move, and now his wife Cardoso has stoked the fire with a sensational outburst.

Speaking to Los Angeles de la Manana, Cardoso said: "I remember Angel coming up and saying, 'an offer from Manchester United has come in. Maybe we'll be a little more financially secure'.

"We fought about it. I told him, not a chance, he could go on his own. 'No, come on. Let's go', he replied. There was a lot of money involved, and afterwards, the Spanish were calling us money grabbers. And they were right!

"If you are working for a company and the competition comes along and offers to pay you double, you take it!"

Cardoso had previously visited England with Di Maria to see her friend Gianinna Maradona, who at the time was married to Sergio Aguero.

She didn't get a good feel for the place, labelling the women: "Pasty-faced and white, prim and proper," the food: "Disgusting", and Manchester: "A s***hole".

Cardoso added: "I didn't want to go to Manchester because I am friends with Gianinna Maradona, who was married to Aguero, and we flew from Madrid to his house in Manchester to pay him a visit for two or three days when Angel had a few days off at Real Madrid.

"It was horrible! A shithole, we went to the house and we were like 'see you later guys, we're out of here'. When we left, I said to him, 'Go to any country - except England'. Anyway, one year later and there we were in England.

"I didn't like anything about it, not a thing. The women are all pasty-faced and white, prim and proper... weird. You're walking down the street and you don't know if they're going to kill you or what.

"The food's disgusting. All the girls are all dolled up to the nines, perfectly made-up and there's me with my hair in a bun and with no make-up on."