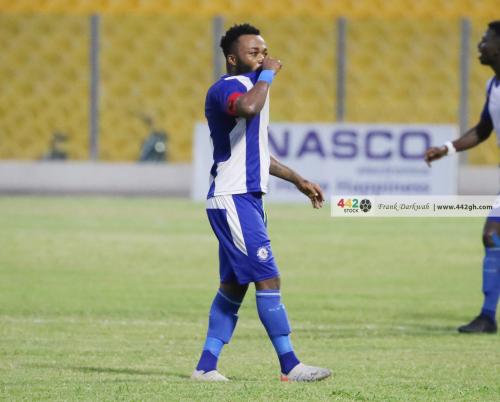 Great Olympics captain and midfielder Gladson Awako couldn’t resist a sly dig at Hearts of Oak after they beat them in the Ga Mantse derby on Saturday.

Awako who has been instrumental for the club since joining them last year, ran the showed on Saturday night as the Dabe Boys scrape past Hearts of Oak with a 2-0 win to earn the bragging rights in the Mantse derby.

Awako, first winner of the 2020/21 Ghana Premier League Nasco Player of the Month opened the scoring with a sumptuous free-kick at the Accra Sports Stadium to set the tone for his club's victory.

Maxwell Abbey made it a tall mountain to climb for the Phobians with his strike in the 17th minute doubling Yaw Preko's side advantage.

The win has seen Great Olympics surge to third on the Ghana Premier League table as Hearts of Oak drop to sixth.

Reacting to his outfit's victory over their city rivals, the former TP Mazaembe midfielder couldn't resist aiming a swipe at Hearts of Oak over who the real owners of the Ga Mashie land are.

He further called on his teammates not to let their guard down.