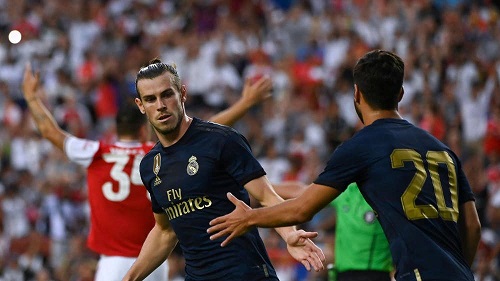 Unai Emery endured a disappointing end to Arsenal’s US tour as their clash with Real Madrid turned into a farce.

Arsenal blew a two goal lead and then lost in a penalty shoot-out as the Spanish giants staged a stirring second half comeback led by Gareth Bale who scored just two days after Real Madrid boss Zinedine Zidane told him to leave.

But the game was spoiled by referee Tim Ford who sent off both Arsenal defender Sokratis and Real Madrid’s Nacho in the first half in the International Champions Cup pre-season tournament.

They both went for two yellow cards - Nacho got his second after just eight minutes when he conceded a penalty for handball - and both managers will feel frustrated.

It is supposed to be a training exercise to get ready for the season but, rather than dish out warnings, the referee went straight for his pocket on all occasions.

Alexandre Lacazette put Arsenal ahead from the resulting penalty after Nacho’s handball on the line and that left Real Madrid down to ten men.

Arsenal made it 2-0 after 25 minutes with a lovely goal as Granit Xhaka’s pass was flicked on by Lacazette and then Aubameyang raced through, rounded the keeper and Sergio Ramos slid in but could not stop the ball crossing the line.

However, some of the gloss than disappeared for Arsenal as Sokratis was booked twice in two minutes, first fouling Toni Kroos and then Luka Modric which saw him get his marching orders after 39 minues.

Zidane brought on Bale at half time as the Wales star was given a reprieve as Eden Hazard was substituted after just 45 minutes.

Bale cleared Calum Chambers’ shot off the line and then substitute Eddie Nketiah missed two late chances as neither side could find a winner and it went to penalties.

Reiss Nelson and Bukayo Saka scored their penalties but Granit Xhaka, Nacho Monreal and Robbie Burton missed while Isco, Raphael Varane and Vinicius Junior were all on target with only Bale missing in the shoot-out.