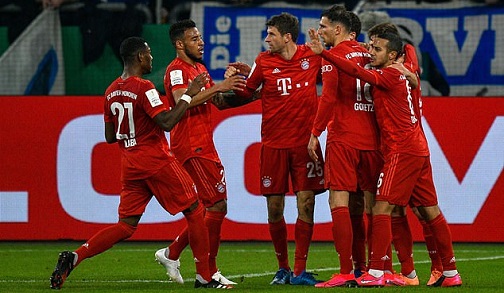 Bayern MunichÂ andÂ Borussia DortmundÂ players have agreed to take a pay cut while there is no football being played due to theÂ coronavirusÂ crisis.

Bosses at the two German giants held talks with their players on Monday to plot a way they can navigate the coming weeks with the resumption of football still looking to be some way off.Â

There has been noÂ BundesligaÂ action since March 8 with the coronavirus pandemic decimating the sporting calendar across the world.Â

READ ALSO:Â FIFA, WHO team up to combat Covid-19

And,Â according to German newspaper Bild,Â Dortmund players have taken steps to reduce their pay and the club are also targeting a 20 per cent reduction of pay while there is no football being played.

It was also suggested in the meeting that players should reduce their pay by 10 per cent if games go ahead behind closed doors.

Manager Lucien Favre, who earns â‚¬4.5m (Â£4.1m)-per-year, also announced he was happy to forego some of his wages.

It is claimed Dortmund's annual wage bill is around â‚¬140million (Â£130m), meaning the club will save roughly â‚¬2.3m (Â£2.1m) per month by implementing these measures.Â

It is hoped around 850 employees will get to keep their jobs as a result.Â

The Bayern players and board of directors will also take a 20 per cent pay cut to ensure the other employees of the club can keep their jobs.Â

According to BILD, fellow Bundesliga side Schalke will do the same in the coming days.Â