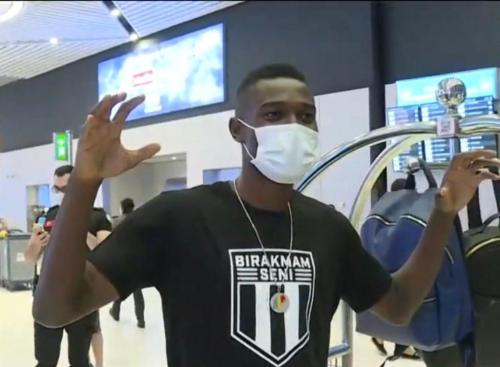 Bernard Mensah has landed in Turkey for his Besiktas medical ahead of sealing his move from Kayserispor.

The 25-year-old arrived in the Turkish capital with his wife and two kids on Sunday.

The Kayserispor player travelled to Istanbul after his club agreed to transfer him to Besiktas on loan deal pending a full transfer on a bumper contract.

Bernard, who has already agreed personal terms with the Turkish based-club, is expected to be a Besiktas player by the end of this week.

He will undergo a medical test today( Monday) before sealing the transfer deal.

The Ghana international will sign a 500,000 Euros loan deal with Besiktas on Monday if he passes the medical.

Before travelling to Istanbul he signed a one-year extension to his contract with Kayserispor who now have him under contract until 2022.

Mensah was on a buyout clause of 2.8million Euros at Kayserispor at the beginning of last season before his latest contract extension scored 5 goals and 8 assists in 26 matches.