BOXING: Anthony Joshua knocks out Alexander Povetkin in seventh round 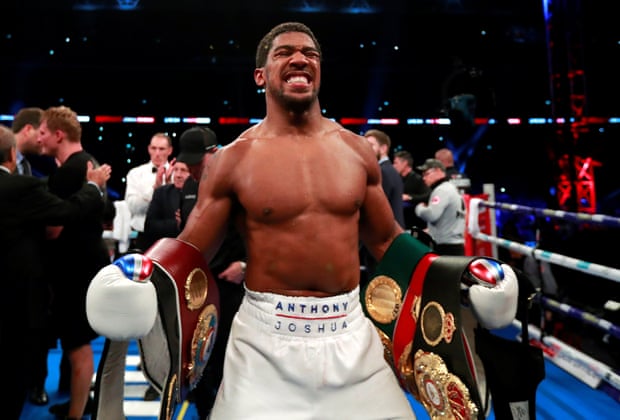 was another heavyweight fight for the ages, and what a night at the national football stadium as Anthony Joshua Â­finished Alexander Povetkin in a dramatic seventh round to retain his three world heavyweight titles. Twenty-two fights, 22 victories.

The IBF, WBO and WBA champion, criticized in some quarters for failing to finalize a deal with the division's other high-profile names, responded emphatically with a seventh-round stoppage of the Russian, who had never been beaten inside the distance.

After an early chess match in which Joshua suffered a bloodied nose before cutting his rival, the Briton grew in confidence and a savage right hand followed by a left hook began an onslaught which would prove telling.

Joshua had emerged into the stadium in that white robe, aping Muhammad Ali, looking so relaxed. He raised a white-gloved hand to friends and family sitting ringside, shadowboxed his way to the ring on a hydraulic lift, the biggest commercial commodity in the sport.

The big roar went up. Spumes of fire exploded around him but this is now a familiar walk down Wembley way, soundtracked to the chant of â€˜O, Anthon-eeee Joshu-uaâ€™.

Another right-left combination downed Povetkin, who somehow made the count, only to stagger into a left hook which saw him slump into the ropes, leaving referee Steve Gray with no option but to intervene.

Roars poured down to ringside as the rain had all day, with Joshua's corner ecstatic and rightly so. His display showcased poise, intellect and power, sending a message to the heavyweight division that the champion will take some stopping.

Joshua, who had been suffering from flu during his preparations and had a problem with his right hand before the fight, paid tribute to his opponent.

"Povetkin is a very tough challenger, he proved that with good left hooks and counter punches", he said.

"I came in here to have fun, and give it my best. I knew he was strong to the head but weak to the body. I was just mixing it up. It could have been seven, maybe nine, maybe 12 rounds to get him out of there, but the ultimate aim was to be victoriousâ€.

He said "and I got my knockout streak back," added Joshua, who was taken to 12 rounds for the first time in his previous fight against New Zealand's Joseph Parker in Cardiff in Aprilâ€.

Less than 24 hours after WBC champion Deontay Wilder and Tyson Fury confirmed their 1 December fight, Joshua snatched the heavyweight limelight back his way.

He will be back at Wembley on 13 April and whoever steps in with him next will face questions as to how they thwart the champion after a display like this.

His last outing here was a see-saw encounter with Wladimir Klitschko. On that night, he came of age, setting new levels of excitement and expectation.

Joshua earned Â£20 million for his nightâ€™s work â€“ the Russian heads back east with Â£6m in his bank account. Joshua knew that he had to be at his best against the shorter, powerful, tank-like build of the man known as â€˜the White Lionâ€™, who wanted to get in close, on to Joshuaâ€™s chest, and explode with his dangerous arcing left hooks, and an overhand right which had put 70 per cent of his previous opponents to sleep.