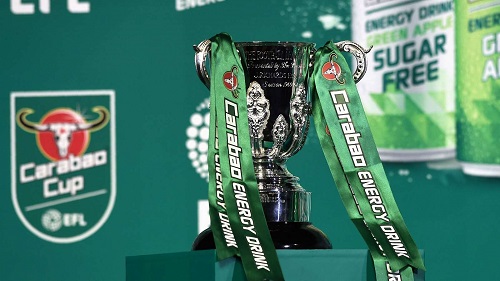 Holders Manchester City are away at Oxford United, with Everton hosting Leicester.

Colchester are the lowest ranked team left in the competition having beaten fellow League Two side Crawley on Tuesday to reach this stage for just the second time in their history.

John McGreal’s side have already caused a shock this season after beating Tottenham on penalties in round three last month.

Former England goalkeeper David James, who helped conduct the draw, said: "If they (Colchester) are going to enjoy a cup trip, that's the place they want to go to get an amazing result. Playing at Old Trafford, it's a magical draw."

Liverpool, who have won the League Cup a record eight times, beat Arsenal on penalties on Wednesday after a thrilling 5-5 draw at Anfield.

However, the participation in the competition could be in doubt after manager Jurgen Klopp admitted the club may have to forfeit their quarter-final due to fixture congestion.

The fixtures are due to be played the week commencing December 16, but Liverpool will be unable to participate as they head to Qatar for their Club World Cup semi-final on December 18.

The EFL say they are in discussions with the Merseyside club over an alternative date.