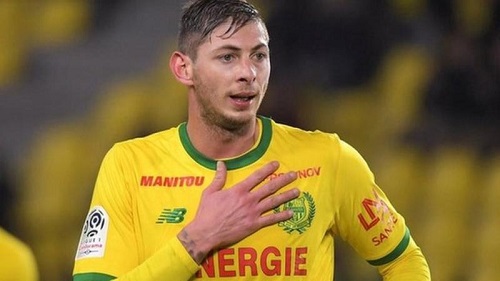 Cardiff City face a three-window transfer ban if they fail to pay Nantes the first instalment of the £15m fee for striker Emiliano Sala.

Sala, 28, died in a plane crash in January while travelling from France to join his new club.

FIFA has released the full reasons for its September ruling ordering Cardiff to pay the first 6m euros (£5.3m).

Cardiff will lodge an appeal against the decision in the next two weeks to the Court of Arbitration for Sport.

The Championship club have argued they were not liable for any of the fee because the Argentine was not officially their player when he died.

The world governing body's players' status committee (PSC) ruled Cardiff must pay the sum "corresponding to the first instalment due" in the transfer agreement and rejected the Welsh club's arguments on a variety of grounds.

The PSC report reveals Cardiff had sought to delay Fifa's judgement until possible civil and criminal proceedings, as well as an Air Accident Investigation Bureau investigation had been concluded.

They also argued Nantes would be "liable" for damages to them over the fatal flight, which was booked by Willie McKay and his son Mark, who was employed by the French club, to find a buyer for the player.

McKay has denied any involvement in the selection of the plane or pilot, Dave Ibbotson, whose body was never recovered.

The committee report says: "The members of the Bureau decided not to take into account any arguments brought forward by Cardiff in front of FIFA in relation to the circumstances surrounding the tragic passing of the player."

The PSC dismissed Cardiff's claim that Sala's employment with Nantes had not been terminated.

And they also rejected Cardiff's contention the transfer was not fully completed, saying the Football Association of Wales had undertaken "all the necessary requirements" less than two hours before Sala's flight left Nantes.

The report said: "The player's transfer from Nantes to Cardiff has to be considered as validly concluded between the parties, hence the player was a player of Cardiff."

The PSC makes it clear this judgement relates only to the initial payment of the transfer fee and not to further instalments, which are due in January 2020 and January 2021.

Cardiff were allowed 45 days from the moment Nantes provided them with bank details to pay the French club an initial £5.3m, plus interest accrued since January.

The report also said: "The Bureau finds it regrettable that the dispute could not be settled amicably."

Cardiff have refused to comment on exact details of the PSC findings, but have reiterated their intention to challenge the decision at the Court of Arbitration for Sport.

BBC Wales Sport has learned the appeal has to be lodged in the next two weeks.

The plane carrying Sala and pilot Ibbotson, 59, crashed in the English Channel on 21 January, two days after the player's transfer was announced.

Sala was exposed to high levels of carbon monoxide prior to the crash, a report later revealed.