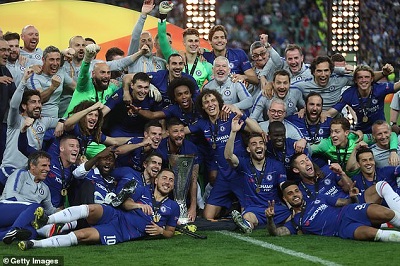 Chelsea will be in pot 1 for the Champions League group stage next season after beating Arsenal in the Europa League final on Wednesday night.

However they could still face Real Madrid as Zinedine Zidane's side are in pot 2 and therefore maybe come up against club legend Eden Hazard if he makes the switch to Spain.

'Now it depends on the club, both clubs. I'm just waiting like the fans wait, we will know in a couple of days.

'I think it's a goodbye, but in football you never know. My dream was to play in the Premier League, I did it for seven years. Maybe now it's time for a new challenge.'