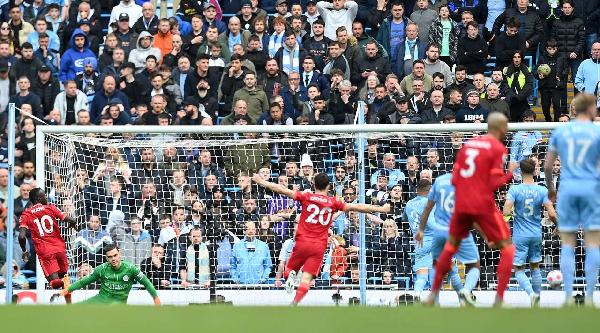 The reigning champions dominated most of the first half and took the lead on five minutes when Kevin De Bruyne’s heavily deflected strike deceived Alisson and flew in off the far post.

Liverpool looked anxious and uncomfortable at the back and could easily have fallen further behind before putting together a superb move to level on 13 minutes.

Trent Alexander-Arnold chipped in with another fine assist when he touched back Andy Robertson’s sweeping cross for Diogo Jota to coolly steer a low shot beyond Ederson.

City continued to dominate despite the setback and regained the lead when Gabriel Jesus made a late run to beat Liverpool’s offside trap and nip in ahead of Alisson to net off a left-wing cross.

The visitors were fortunate not to have been further behind at the interval and it proved crucial as they levelled within a minute of the restart.

Mo Salah turned into space on the right and released Mane with a delicious through pass which the Senegalese birthday boy converted with a clinical first-time finish.

It led to a much more evenly contested second half with both Salah and Jota going close for the away side while Raheem Sterling had a goal correctly chalked off for offside by VAR.

City substitute Riyad Mahrez could have won it at the death with a long-range free kick that hit the post and a poor attempt at a chip when sent clear on Alisson, but Liverpool survived to earn a share of the spoils.

The result means the title race remains firmly in the balance with City ahead by just that one point with seven matches left to play.

The two sides will now switch focus to their respective Champions League quarter final second legs on Wednesday before gearing up for their FA Cup semi final showdown at Wembley next Saturday.