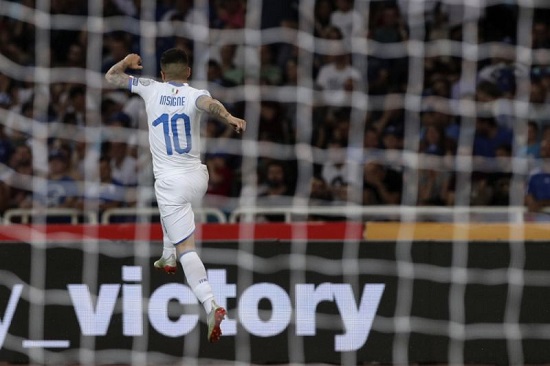 Attack-minded Italy and Belgium won in style while Germany made it two wins from two games in 2020 European Championship qualifiers on Saturday.

But Saturday was not an entirely good night for European powerhouses. In the biggest upset, Turkey contained France's offensive power to hand the world champion a shock 2-0 defeat.

World Cup finalist Croatia put its campaign back on track with a 2-1 victory over Wales, and Northern Ireland rallied late for its third straight victory.

Russia thrashed San Marino 9-0 for its biggest win since the Soviet era. That surpassed the previous post-Soviet marks of 7-0 against Liechtenstein and San Marino.

Star-studded France scored four goals in each of its first two wins in Group H, with its intimidating forward line of Antoine Griezmann, Olivier Giroud and Kylian Mbappe grabbing a goal each in both games.

It didn't work against Turkey.

The three started in Konya but finished empty-handed in the first victory for Turkey against France after four losses.

France coach Didier Deschamps was scathing about his side's performance.

"When you play like that on a collective level there's nothing positive to take from the game," he told broadcaster TF1. "We didn't play the way we should have against a team which played the way it likes to."

The Turkish side proved highly effective, converting the first chance in the 30th. Kaan Ayhan headed in the first goal and, 10 minutes later, Cengiz Under stunned France with the second.

With three wins in three games, Turkey leads Group H with nine points. France is three points behind in second, along with Iceland which beat Albania 1-0. Moldova beat Andorra 1-0 for its first win in this group.

Led by captain Eden Hazard a day after he completed a highly anticipated transfer from Chelsea to Real Madrid, Belgium applied pressure against Kazakhstan in Brussels from the start which quickly paid off in a 3-0 win.

Dries Mertens put the hosts ahead with a deflected shot 11 minutes into the game with Hazard providing a key pass. Four minutes later, Mertens turned into a supplier with a cross for Timothy Castagne to make it 2-0.

Five minutes into the second half, forward Romelu Lukaku was in the right place for an easy tap in after Mertens' shot bounced off the post.

"If you lead 2-0 after 15 minutes, then that is excellent," said Belgium coach Roberto Martinez. "In the second half we also started well, so the mentality of this team was very good."

Artyom Dzyuba led the Russians with four goals in Saransk.

Italy's new attack-minded approach under coach Roberto Mancini is looking like an effective remedy after the disappointment of failing to qualify for the 2018 World Cup.

Facing unbeaten Greece in Athens, Italy needed just over half an hour to put the result beyond doubt with the goals coming in a 10-minute span for a 3-0 win.

Nicolo Barella opened the scoring in the 23rd with Andrea Belotti setting the goal up in his first game for Italy since September 2018. Lorenzo Insigne made it two in the 30th and Leonardo Bonucci headed home the third in the 33rd.

"No, it wasn't our best performance but we were good at controlling the match from the first minute," Mancini said. "But we should have pushed more, we sat back too much ... in the second half we should have scored more goals. That needs to be improved."

Finland grabbed a 2-0 victory over Bosnia-Herzegovina and is three points behind Italy in second. Armenia got the first three points in the same group after beating Liechtenstein 3-0.

James Lawrence scored an own-goal to give Croatia an early boost after diverting a cross from Ivan Perisic in the 17th minute in Osijek.

Croatia looked to be the better side anyway as it moved on from recent inconsistent results.

Perisic doubled the advantage early in the second half for Croatia to rebound from a 2-1 loss to Hungary in Budapest. Substitute David Brooks cut the deficit for Wales with a deflected shot in the 77th.

Hungary kept momentum with a 3-1 win in Azerbaijan to share the Group E lead with Croatia on six points, with Wales and Slovakia trailing by three points but with a game in hand.

Northern Ireland beat Estonia 2-1 and is a surprising early leader of Group C that includes Germany and the Netherlands.

After a confidence boosting 3-2 victory over the Netherlands, it was only a question of time for a dominant German side to score against Belarus in a 2-0 win.

Leroy Sane fooled a marker inside the area before a curling finish for the opening goal early in the first half. Marco Reus half-volleyed the second goal in the second half as Germany looked confident as a team that is putting a disastrous World Cup campaign behind it. Germany next plays Estonia on Tuesday.

Northern Ireland has nine points, three more than Germany which has a game in hand.