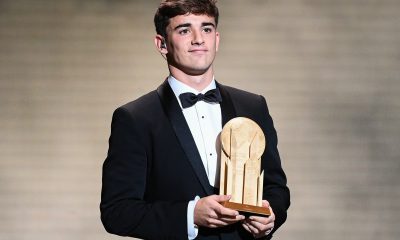 Gavi has been named the winner of the 2022 Golden Boy award to cap a great week for the Barcelona midfielder.

The 18-year-old picked up the Kopa Trophy at the Ballon d’Or awards on Monday and now has another prize to add to his collection.

Gavi once again beat off competition from Jamal Musiala, Jude Bellingham and Eduardo Camavinga to claim the prestigious trophy.

The midfielder also follows in Pedri’s footsteps once again. Pedri won the award last year and has now seen Gavi succeed him, similar to the Kopa Trophy.

The Golden Boy award is handed out by Italian newspaper Tuttosport to the best Under-21 played in Europe during a calendar year. Sports journalists from across Europe vote for their favorites and the player with the most points wins.

Pedri, Ansu Fati and Nico González were also on the final shortlist. Alejandro Balde was also nominated but did not make the final cut.

Gavi is the third Barcelona player to win the award, which was started in 2003, after Pedri and a certain Lionel Messi.