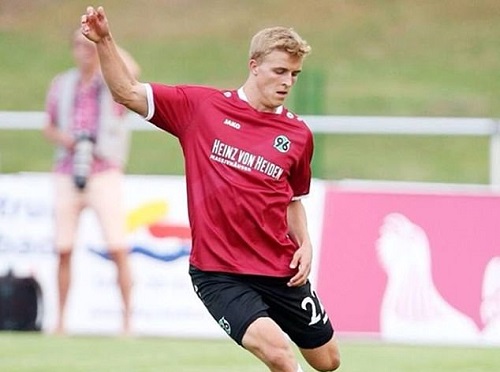 A German second division footballer has tested positive for the virus.

Hannover say their defender Timo Hubers, 23, is in quarantine at home while the rest of the playing staff will be tested.

'He shows no symptoms himself. So far, when he found out that a person who had been with him at the event was tested positively, he reported directly to the doctor and temporarily went into quarantine at home. 'Â

The entire squad, coaching team and staff are being tested for the virus as a precaution.

Media appointments have been cancelled and training will take place behind closed doors but Hannover's clash withÂ Dynamo Dresden is set to go ahead.

According to the club's website, it is assumed that Hubers picked up coronavirus at an event on Saturday evening.Â

They claim that the player has had no contact with his team-mates since picking up the illness.Â Â

Meanwhile,Â Olympiacos have confirmed that all of its playing staff, coaches and board members have tested negative forÂ coronavirus.

The Greek club, who faceÂ WolvesÂ in theÂ Europa LeagueÂ on Thursday, underwent tests after their ownerÂ Evangelos Marinakis, who also owns Nottingham Forest, revealed on Tuesday that he hadÂ been diagnosed with the virus.

The Coronavirus outbreak has led to the postponement and playing without fans in many matches in the past weeks. Recently the Premier League announced thatÂ the pre-match handshakes between both teams and officials will not take place until further notice while all sport in Italy has been suspended until at least 3 April because of coronavirus.

Also, the Champions League clash between Barcelona vs Napoli will be played without fans.